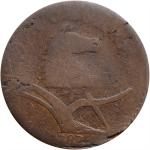 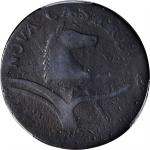 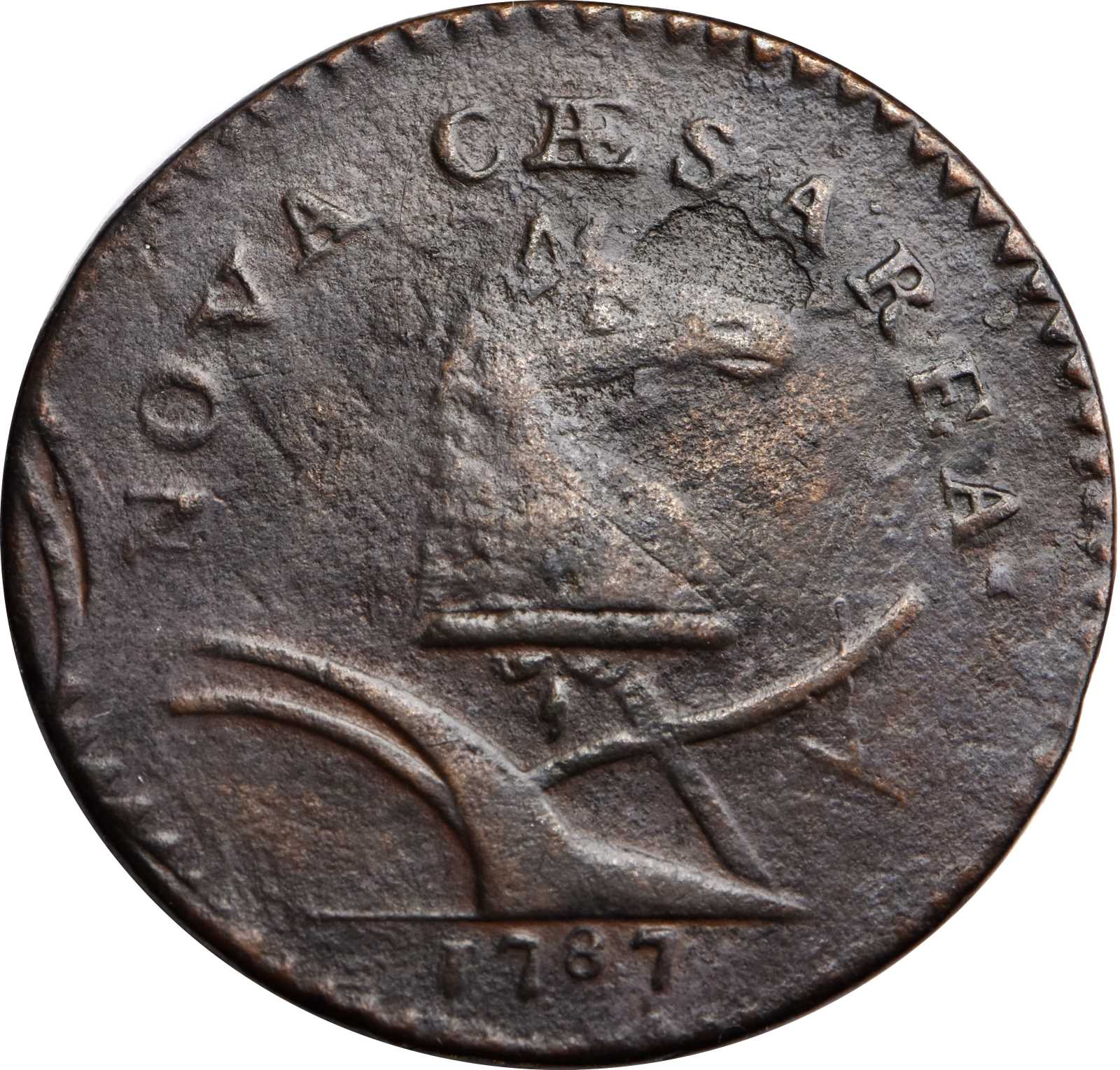 1787 New Jersey Copper. Maris 62-r, W-5355. Rarity-7+. Large Planchet, Sprig Above Plow, Hidden Initials. VF Details--Environmental Damage (PCGS). 140.84 grains. The preeminent highlight of the present collection of New Jersey coppers and a thrilling offering for enthusiasts of the series. It took nearly a century for this die combination to be discovered from the time Dr. Maris originally established the attribution system for New Jerseys and published known varieties in 1881. Neither die is especially rare, as obverse 62 is commonly seen in combination with reverse q, and reverse r less commonly but still relatively frequently seen with obverse 63. The combination of the two however was completely unknown until discovered by Richard August at a Massachusetts coin show in 1974. Just three additional specimens including the present coin have turned up in the ensuing 57 years. Interestingly, all four examples are more or less of equivalent grade. Some are slightly sharper than others, and some are slightly smoother than others, but on balance they all settle somewhere in the grade range of Fine. <p>The Peters example is perhaps the sharpest known with strong definition on the horsehead including a bold eye and separation in much of the mane, and the reverse shield with a good majority of the horizontal and vertical shield lines visible. The surfaces are slightly granular and the texture suggests having been burnished at some time. Retoned to dark brown with some undertones of reddish-tan. While the surfaces arent perfect, the overall appearance is fairly satisfying thanks to the strong detail, glossy complexion, and lack of significant marks. Also of note is that this piece was double struck, the first strike evidenced by plow handles near the rim at 9 oclock. The positioning shows that first strike was about 25% off center and that there was an approximately 80 degree clockwise rotation between strikes. The second strike was nicely centered and quite bold, with just the aforementioned plow handles and slight distortion to the P of PLURIBUS left as evidence of the double strike. As if the extreme rarity of the die variety wasnt enough, the error certainly adds to the intrigue, especially considering the rarity of any sort of striking error on the generally well made Morristown Mint large planchet varieties.<p>This is just the second auction appearance of the variety and it has been nearly three decades since the first, when we sold an example in our (Bowers & Merena) Spring Quartette Sale of March 1992. This means an entire generation of New Jersey copper collectors was left without access to any example of this variety, and it could very well be a similar amount of time that passes before the next Maris 62-r offering. The excitement will be high when this coin hits the auction block and an aggressive bidding strategy is advised for any interested parties.<p><p> From the Norman G. Peters Collection.