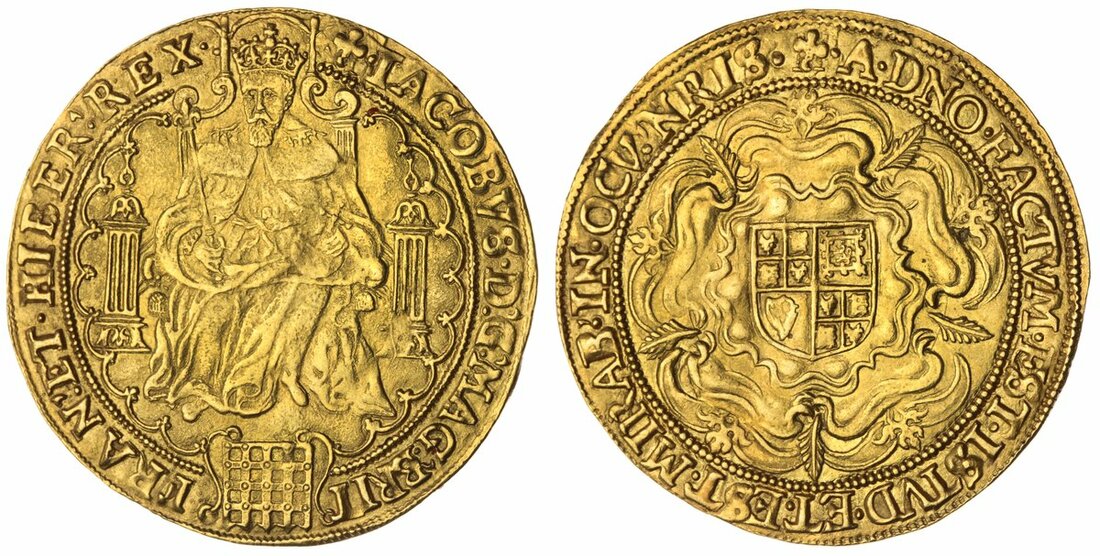 
This emphatic portrait of the first ruler of the unified Kingdoms of England and Scotland is heavily reminiscent of its Tudor forebear introduced by the 'Winter King' Henry VII in 1489. The Royal Shield set atop a Tudor rose attempts to reassure the viewer of the stability by which the House of Tudor had transitioned into the new House of Stuart, despite the two having been sworn enemies of the killing grounds of Flodden exactly a century before this coin was struck.

The Jacobean imagination reinterprets the traditional with flourishes of 17th Century design that embue as much a sense of modernity as they do the novelty of James I's unprecedented reign. Far removed from the Gunpowder Plot of the previous decade, or indeed the Royal paranoia about witchcraft that had overtaken the last decade of his reign in Scotland, he found in the English Royal Court an unexpected finery and intellectualism that required initially his emulation and then his leadership.

The restoration of the volute scrolls to the Royal chair is a clear demarcation from the Gothic stylings of St Edward's Coronation throne upon which he sat in 1603, and indeed that had inspired his predecessor Elizabeth's comparable 30-Shilling piece. Instead it harks back to the imagery of Henry VIII, still regarded at least then with his now long-forgotten epithet 'The Great' and as depicted on his final coinage (see lot 44). The overexpression of these elaborate scrolls are not mere artistic licence, but a clear demonstration of the extent to which Classical revival had seeped across Europe and into England throughout the 16th Century, ultimately culminating in James' final portraiture reflecting him not merely as a King of the English or the Scottish, but a modern day Roman Emperor.

Stripped back however is the overwhelming finery of the Catholic tradition, in its place an austere and plain-backed throne from which the countenance of the monarch leaps forward. As too do the three symbols of state: the Orb, the Royal Sceptre and the Portcullis of the Royal Houses of Parliament, a motif that would take on a profound status after the thwarted events of November 5, 1605. The pyx-mark is however perhaps the most evocative imagery of all. Depicting a trefoil, viewers would associate the symbol with the Christian trinity, perhaps even with perpetuity or even that the three leaves embody the past, the present and the future.