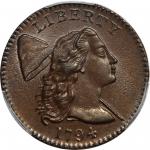 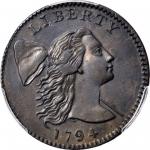 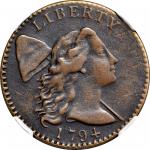 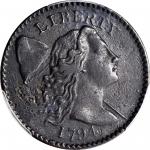 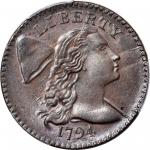 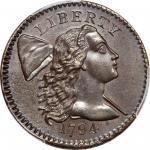 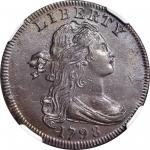 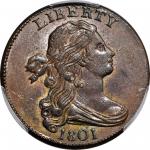 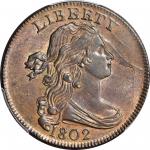 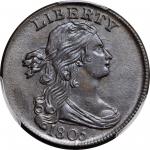 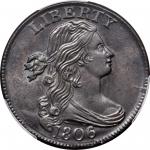 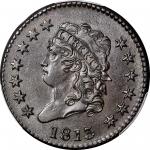 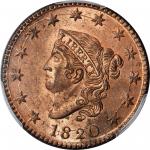 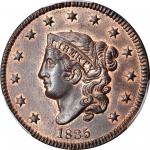 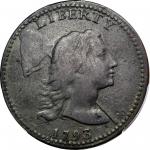 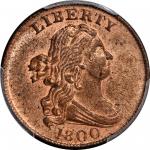 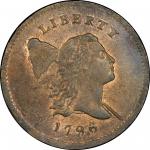 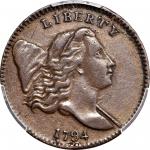 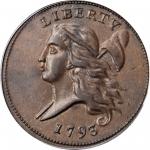 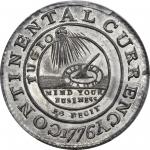 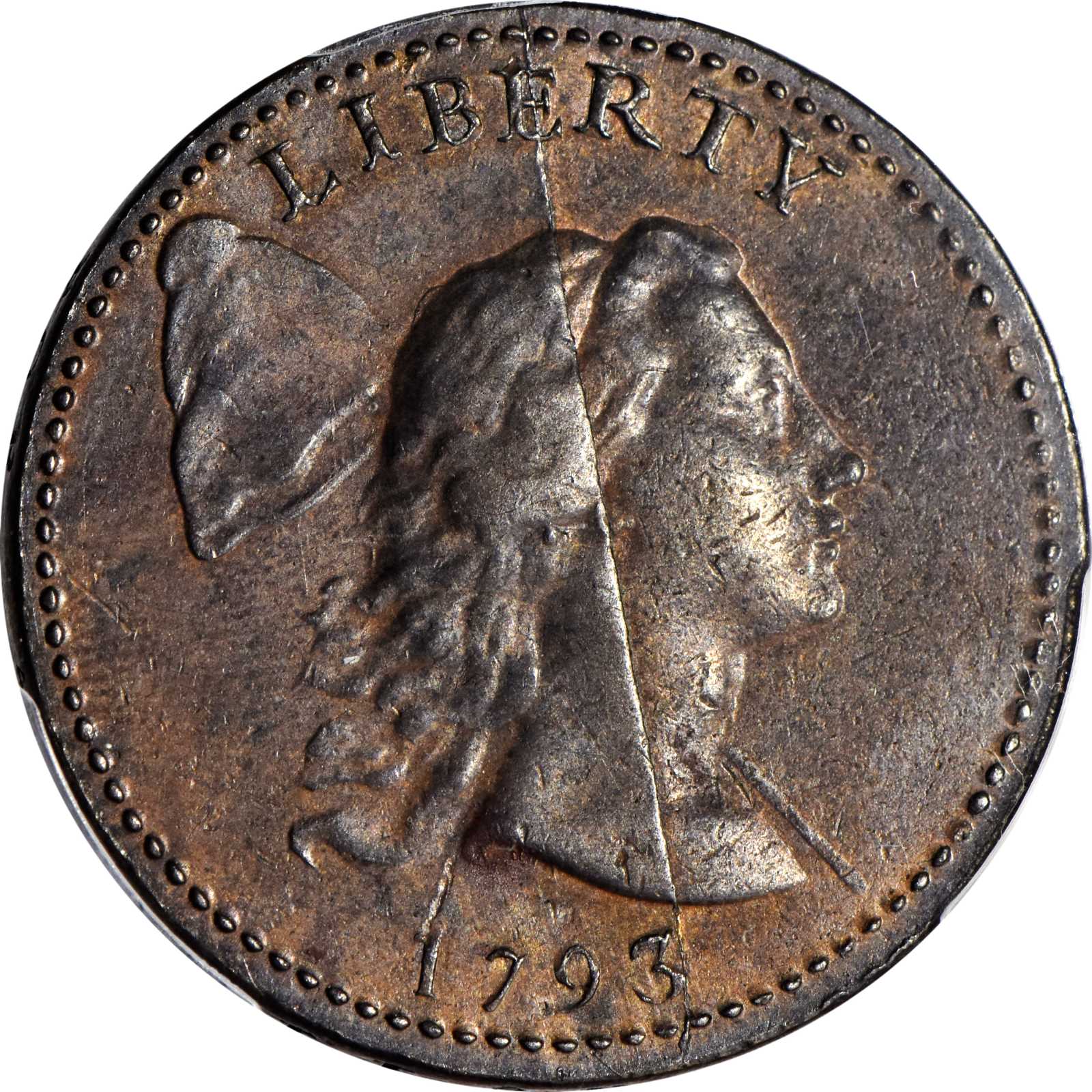 1793 Liberty Cap Cent. S-14. Rarity-5-. AU-53+ (PCGS).This obverse is among the most distinctive in the entire large cent series, neatly bisected by a vertical linear crack that effectively breaks the die face into two disconnected halves. The left half of this obverse is on a slightly higher plane than the right, leaving this variety consistently more worn on the left side of the obverse than the right. This coin is less worn than any known specimen, making it not only desirable to connoisseurs as the finest known example, but of great importance to researchers.This die almost certainly split during the hardening process. All known examples show the bisecting crack, and it is unlikely any were struck without it. The crack extends from the die edge at 12 oclock, between the two beads atop the letter E in LIBERTY, on a nearly straight path to the right side of the base of the digit 3 in the date, and to the die edge beyond it after a short dogleg left on the other side of the bead just right of the base of 3. The E in LIBERTY shows a clear shift on the vertical axis between the details on the left side of the crack and those on the right. Viewed laterally, the plane of the two halves appears most disparate at the E in LIBERTY, though the left side is consistently more elevated than the right for the entire length of the division. No clash marks are seen, denoting this as the earliest die state, Breen Die State I.The surfaces are mottled tan and steel, with navy blue dominating the central reverse. Some livelier peach tones are seen around the peripheries, particularly on the reverse, where mint color persisted longer than elsewhere. A few ruddy areas are seen at the lower obverse, at Libertys throat, at the truncation of her bust near her lower locks, and left of the date. Some raised verdigris persists within the patch at the bust truncation, and some very faint hairlines below the bust truncation remain from when some encrustation was removed generations ago. Subtle hairlines are seen elsewhere, including beneath the cap and atop the reverse. Scattered light marks are present, including those remaining on the planchet from before striking and a dull scrape above the digit 1 in the date. The obverse is aligned to 10 oclock, with the beads outside the cap closest to the rim; the reverse is nearly ideally centered.Of the top seven examples of this variety listed in the usual census listings, four were discovered in England. Q. David Bowers related the history of this pieces discovery in his 1984 United States Copper Coins: An Action Guide for the Collector and Investor</em>:"In 1962, during a trip to England, James F. Ruddy, my business associate for many years, purchased from a non-collector a 1793 Liberty Cap cent in Uncirculated grade, or very close to it (experts have differed in their opinions). This was subsequently sold into the Charles Jay Collection. Today it ranks as one of the very finest pieces known of this style."</em>When this piece was first added to the Condition Census in 1973, as determined by a committee of Denis Loring, Dr. William Sheldon, Dorothy Paschal, Willard Blaisdell, Gordon Wrubel, Dane Nielsen, and John Wright, it was graded EAC AU-55. It continues to top most Condition Census listings today.PCGS# 35492. NGC ID: 223L.Purchased in England from a non-collector by James F. Ruddy in 1962; Q. David Bowers; Lester Merkin; Charles Jay Collection; our (Stacks) sale of the Charles Jay Collection, October 1967, lot 91; unknown intermediaries (perhaps Lester Merkin); Anthony Terranova; Herman Halpern Collection, by sale; R.E. "Ted" Naftzger, Jr. Collection, by trade, December 1986; Eric Streiner, by sale, en bloc, via Stacks, February 1992; Jay Parrino (The Mint), by sale; Jack Wadlington Collection, by sale, May 1996; Daniel W. Holmes, Jr. Collection, by sale, via Chris McCawley and Bob Grellman, June 2005; Ira and Larry Goldbergs sale of the Dan Holmes Collection, September 2009, lot 24, via Larry Hanks; D. Brent Pogue Collection; our (in conjunction with Sothebys) sale of the D. Brent Pogue Collection, Part V, March 2017, lot 5092. 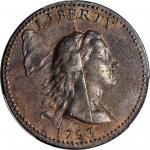 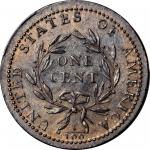