The Government of Sarawak, group of 3 archival photographs of unissued fractional notes, 1, 5 and 10 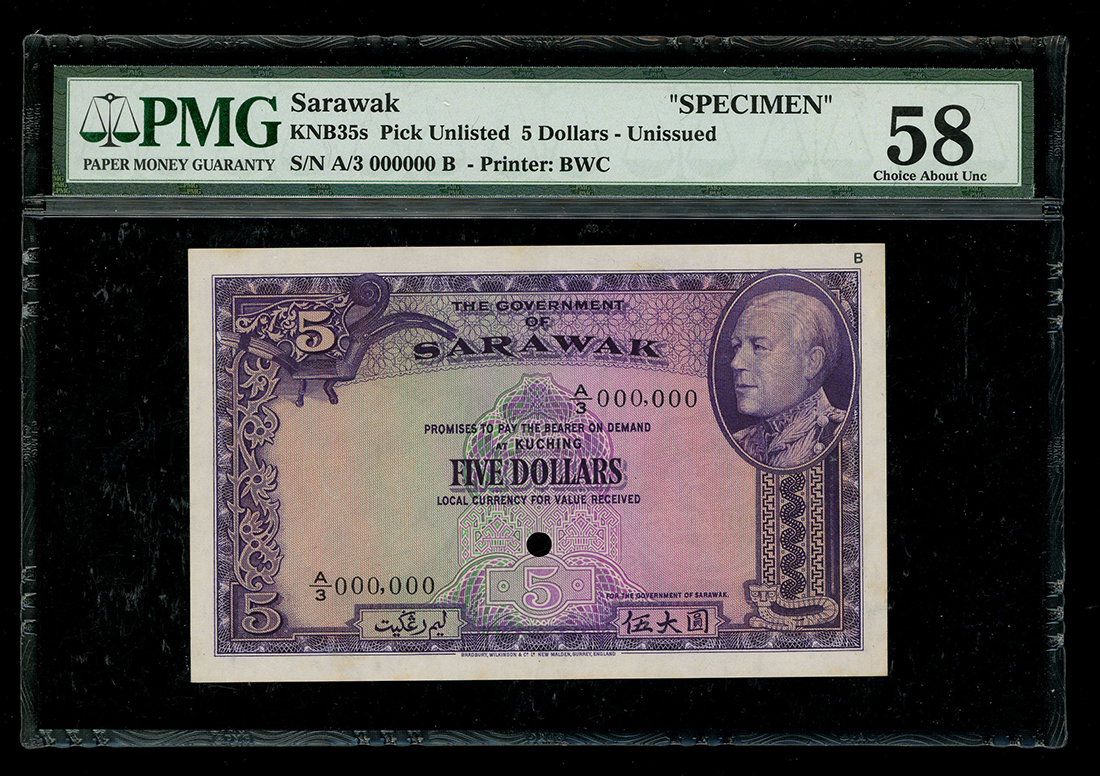 Sarawak, $5 never issued, undated but prepared late 1944/1945, serial number A/3 000.000. (Pick 21), PMG 35 Choice Very Fine.Late in World War II, as it became clear that it would be a matter of time before Allied forces would prevail over those of Imperial Japan, currencies were prepared for release on the liberation of several countries and territories.In these territories Japanese "banana currency" was circulating, and had depreciated greatly in value in comparison to the hard currency notes that it replaced.The moment each territory or colony was liberated, commencing in August of 1945, good money would be required to maintain confidence in the Allied occupation. This essentially had to be printed, packaged, shipped and stored at the nearest practical point to each, so that issue could take place virtually in tandem with Allied liberators taking the Japanese surrender. Thus we see notes prepared in advance for Malaya, Indochina, Netherlands Indies, Sarawak, and the Philippines. While it was until now not generally known, preparations were undertaken for the ultimate liberation of Sarawak -- Rajah Vyner Brookes state having being captured by the Imperial Japanese forces in early 1942. The $5 note illustrated here represents a "survivor" of the issue planned for liberation and printed in Britain on the instructions of the Sarawak government.Most interestingly, the pre-war banknotes of Sarawak had long been guaranteed by the governments deposits in London, and thus were entirely redeemable there at full face value.Banknotes issued in British North Borneo by the Borneo Company were issued on a different basis: they were not backed by bonds or other investments in London, and this presented a problem to the Allies.Thus the question arose of how to redeem pre-war notes in British Borneo after August 1945.The immediate issue in Sarawak was British military currency, with it is understood Sarawak notes that had been hidden or stored through the war in the Treasury being accepted.However, given the uncertain future of Sarawak, these notes also faced an uncertain future!The damage caused by the wartime Japanese occupation and military hostilities ultimately lead Rajah Vyner Brooke to the difficult decision that he could not afford to rebuild his territory and, slightly less than a year after liberation, on 1 July 1946 he surrendered Sarawak to the British crown.Sarawak then became a crown colony.The question of what to do with the 1944-45 notes remained in play until Sarawak ultimately decided to join the Malayan currency union.This lead to the new issue of notes for British South East Asia under the aegis of the Board of Commissioners of Currency of Malaya & British Borneo. The new Board formally came into existence on 1st January 1952.With its inauguration all discussion regarding Sarawak and its proposed or planned note issue permanently terminated.Fortunately original records have now been uncovered by the author relating to the deliberations behind the issue of these notes.In addition a Bradbury Wilkinson archival photograph of the 1944-45 Sarawak series appeared at auction at Spink London in ___________.Most interestingly as the notes were not dated and little was known of them a manuscript inscription on the back giving only the date "1949" lended evidence to the intention at least at this late date to place them into circulation in Sarawak.Interestingly this old photograph brought several thousand Pounds![KELVIN: Can you find the listing for this archival photograph?]However, it is with the discovery of original records that the story of Sarawaks last notes will be told, and the purchaser of this note will be entitled to a complete set of in excess of 100 documents.Pedigree: This note, together with a 5 Dollar and 10 Dollar of the same series and another 1, 5, and 10 of a second series, appeared in the collection of the great Malaysian numismatist, Dr. Chan Chin Cheung. They are illustrated in the memorial volume of the Chan collection, entitled "Paper Currencies of the Straits Settlements, Malaya, British North Borneo, Sarawak, and Brunei: The Collection of Dr. Chan Chin Cheung", published in 1991.The breakup of the Chan CollectionThe notes were subsequently acquired by William Barrett and have remained in his collection to this day. At the time of acquisition, however, he could only speculate at the purpose of the printing of these complete banknotes.At about the same time, William Barrett was shown by Lucas Chin, Director at Sarawaks national museum, Muzium Sarawak, one note -- or at least one note -- in a glazed frame caked in dust, what he recalls being one original note or a reproduction thereof.Whether this item is still at Muzium Sarawak is not presently known.*A unique opportunity to acquire a note of the region printed during the Japanese occupation for circulation on liberation, held back during the next uncertain year, leading up to Sarawaks cession by Vyner Brooke to the British crown, and then intended to be circulated in the new crown colony during the late 1940s and into the early 1950s.Regretfully the printer, Bradbury Wilkinson & Company, lost or disposed of many of its records, and there is apparently absolutely no reference to the printing of these magnificent notes in their surviving archives.