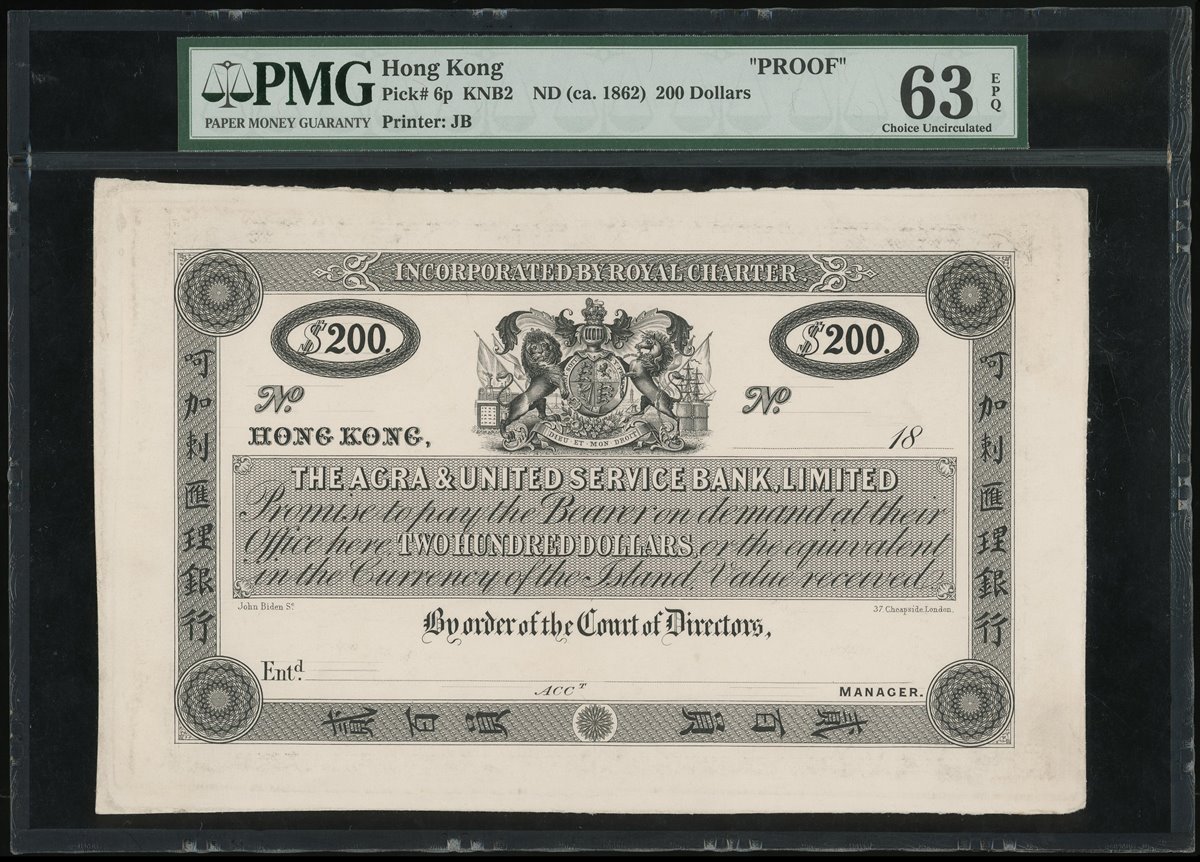 The Agra and United Service Bank, Limited, $200, proof, no date (c.1862), without serial numbers, the signature space to be filled in by hand by the Acct. (Accountant) and the Manager, Believed to be one of two known. Certified by PMG as PF 63 Choice UNC EPQ, and the only note on this bank thus far certified.Engraved by John Biden, Se., 37 Cheapside, London.Historical records show the following circulation figures for the "Chartered Agra & United Service Bank, Limited": Jan 1864 378,000 June 1864 480,065 Dec 1864 422,898.After this the institution was renamed "The Agra & Mastermans Bank, Limited, and showed issue figures from January 1865 to May of 1866. At this latter date the Crisis of 1866 hit, and the bank ran into considerable difficulties. While all its notes were paid (the June 1866 figure shows no circulation), the Bank was unable to issue notes in Hong Kong during the remainder of its (reformed) existence.To our knowledge no issued nor canceled or other form of note has survived on either name of the Bank.This is accordingly the rarest bank of Hong Kong, surpassing even the legendary Oriental. Interestingly the Commercial Bank Corporation of India & the East had an even shorter issue span of February 1866 to May 1866, prior to collapsing in the crash of the summer of 1866. No survivor of the Commercial Banks issue has been seen to date.(Pick 6p), PMG 63EPQ Choice Uncirculated. A phenomenal note that is the dream of most collectors. Other than the unique denomination of $200, this is one of the earliest and most short lived banknote issuing authorities in Hong Kong. The Agra and United Service Bank Limited was established in Hong Kong in 1862 and issued its first banknotes in September of 1863. It merged with Masterman & Co. and was renamed Agra and Mastermans Bank Limited. A great rarity which will find its home in one of the greatest collections of Hong Kong banknotes and will not be seen for many years.