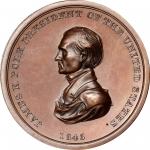 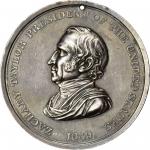 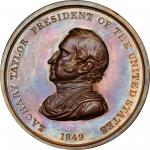 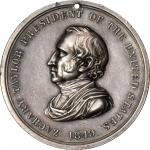 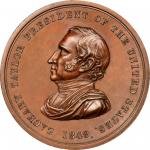 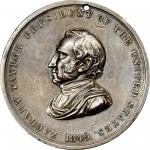 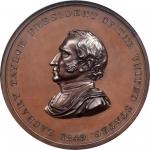 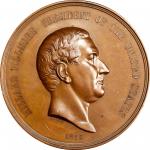 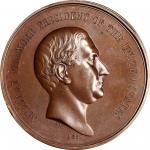 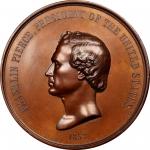 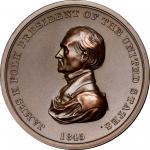 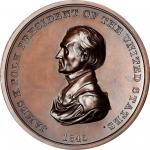 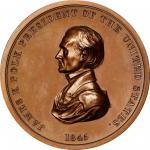 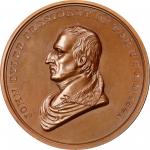 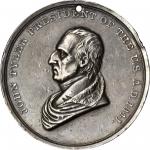 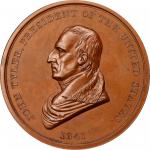 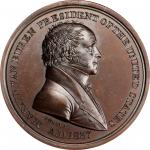 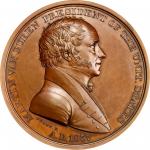 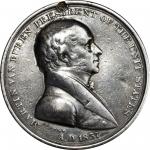 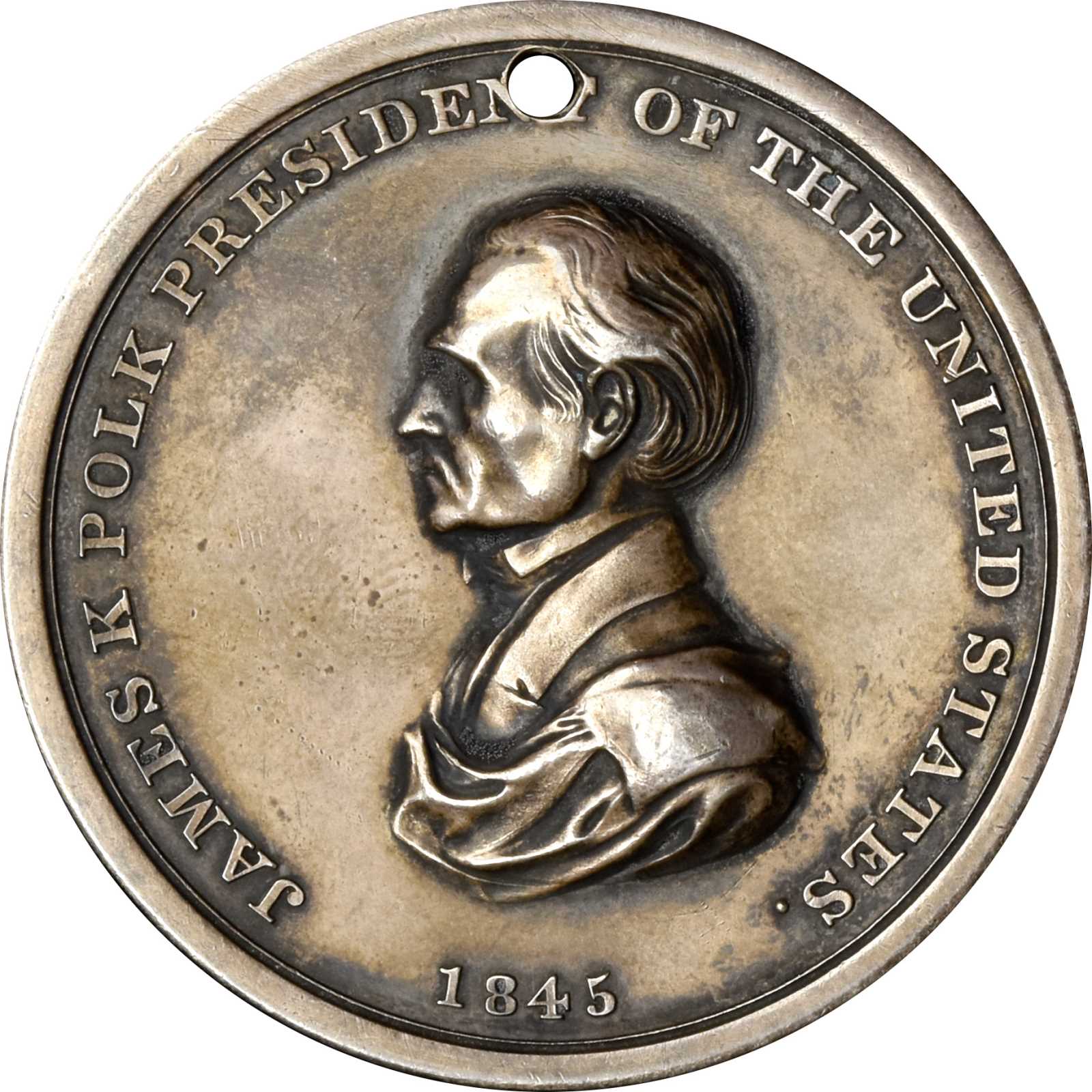 1845 James K. Polk Indian Peace Medal. Silver. Third Size. Julian IP-26, Prucha-46. Extremely Fine. 51.0 mm. 1053.5 grains. We are delighted to once again be able to present this piece for sale. When it last appeared at auction, in August 2012, it set a price record for a Polk of any size, at $57,000! It is quite pleasing, with the extremely high relief portrait showing very little loss of detail. The surfaces have toned to mottled variations of gray and light brown, with traces of pale blue iridescence outlining areas of the relief. Slightly granular under close inspection with light tooling in the fields and a few scattered marks, but none that stands out as distracting in the least. Pierced for suspension as typical.As is the case with the other Polk sizes, the striking and issuance of this smallest size followed closely the pattern of the Tyler medals. There were 100 struck in this size, but in this case the vast majority of the original mintage was returned to the Mint in December 1849 and presumably melted (per the instructions), to be used for striking Zachary Taylor medals. The Mint records indicate that 94 of the 100 were melted, leaving just six specimens issued. As with the large-size Polk, this is one of the rarest silver medals in the entire series, the net issuance likely the smallest of all.As noted earlier in this sale, this reverse die was used to strike all of the small-size medals from the 1809 Madison through this issue. Along with the original reverses for the large and medium medals, this die was deemed no longer fit for use in 1846, the same year the Polk medals were completed and new replacement reverse dies created. The new dies are best identified by the flat-topped letter As. Curiously, both First Reverse and Second Reverse dies were used for the striking of bronze medals for several issues, in perhaps all sizes, but it is virtually impossible to tell exactly when any of these restrikes were made with precision.This reverse comes in two distinct die states. The one mostly seen in the medals of this sale has a small die chip in the inside right rim, between the main rim and the inner border, at 3:00. This medal is from the later state of the die, with an additional chip just below the primary one. We have images of small-size Polks with and without the secondary break among the surviving medals we are aware of. On its face, this suggests that the break occurred during the striking of these medals. According to Prucha, Director Patterson wrote to the Commissioner of Indian Affairs on June 15, 1846 that the Mint was nearly done preparing the Polk medals for delivery. Prucha further noted that “by July 18, the remainder of the medals [for Polk] had been forwarded to the Indian Office.” The dates of Patterson’s letter and of the final delivery provide a fairly tight window of time within which the Polk medals for issue were struck, and theoretically a small window of time when this failure would have occurred, if it indeed broke during the striking of the silver Polks. The challenging detail is that, again, according to the Mint records, just six medals were issued, yet we are aware of seven distinct specimens in existence today. We have images for all of them, so there is no question that at least this many exist. We also have weights and die states on most of them. The pattern that emerges from the data suggests that a small group of these were produced a bit later, as the later die state examples are consistently of a slightly higher weight standard than those of the earlier die state.Carl Carlson reported finding a remarkable five auction records for small-size Polk medals in silver, while Michael Hodder knew of only two “recent auction records for an original” when he described the lone Ford specimen in 2006. He included this piece as one of his referenced originals, but did so without detailed study of this piece and without benefit of the comparative data we have compiled for this series, which, as far as we know, has never before been attempted. As such, it would not have been sensible to consider this medal anything other than an issued original at the time. Whatever the precise date of manufacture, a fact not likely to ever be known with certainty, it remains the case that this medal is from the original U.S. Mint dies, and silver impressions are great rarities in any form. Again, we are aware of seven specimens in total, and two are almost certainly permanent residents at the Smithsonian and ANS, the latter also being a late die state example, as seen here. Ex Presidential Coin and Antique’s Litman, Sullivan and Dreyfuss sale, December 2004, lot 535; Stack’s, February 2008, lot 3581; Stack’s, September 2009, lot 6129; Stack’s Bowers Galleries, August 2012; 11137. 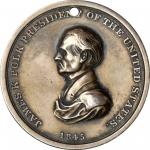 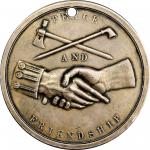