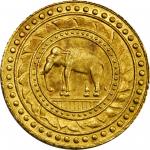 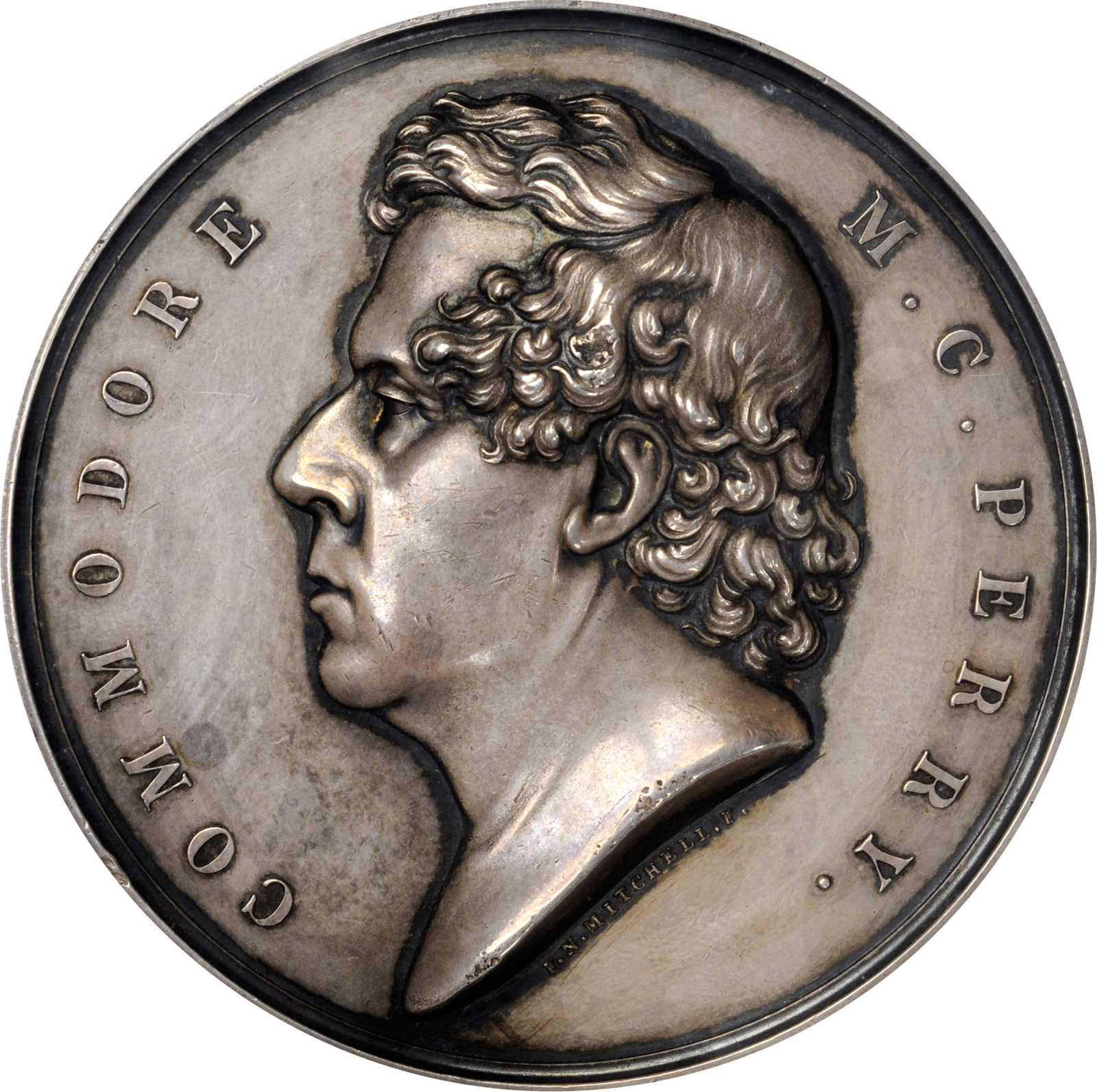 UNITED STATES OF AMERICA. Commodore Matthew C. Perry Treaty with Japan Silver Medal, 1854 (1856). Philadelphia Mint. PCGS SPECIMEN-62.Julian PE-26. Diameter: 63 mm. By Francis N. Mitchell. Obverse: Bust of Perry left; Reverse: 14-line inscription within wreath. Richly original surfaces are bathed in warm pewter gray patina, the protected areas around the rims and design elements with deeper olive-russet and cobalt blue highlights. Semi-reflective fields shine forth nicely as the surfaces dip into a light, the devices satiny in texture with sharp to full striking detail. Smoother in hand than one might expect at the assigned grade level, this premium quality specimen is nearly in the Choice category.Of this medal, only one example was struck in gold, which was awarded to Commodore Perry himself. The gold medal was thought to have been lost and possibly melted until it appeared at auction in 2007. Accompanied with its original box the gold medal sold for $165,000 at auction in Rockland, Maine. Another 20 examples were struck in silver, several of which were awarded to Perrys higher ranking officers, and 107 examples were struck in bronze for award to lower ranking officers and sale to the public.Through "battleship diplomacy" Commodore Perry was able to negotiate the opening of the then-closed Japan to foreign trade. By anchoring a group of warships in Japanese waters, Perry was able to force negotiations with Japan, demanding permission to deliver a letter from President Millard Fillmore. The boats were referred to by the Japanese as "Black Ships," a term that later became synonymous with threatening foreign powers. The final recorded military mission in Japan that involved ninja activity was during this event. The Japanese sent ninja Sawamura Yasusuke to board Perrys ship with instructions to gather information that would reveal the commodores intentions. While the ninja was successful in boarding the commodores ship, the success of the mission is questionable. Sawamura Yasusuke was able to gather some paper documents as well as make detailed descriptions of the ships. However the linguistics barrier hindered him from gathering documents that were of any strategic value. When translated, the documents showed to be letters describing, "extolling the delights of French women in bed," and "British women in kitchens." Essentially letters from sailors describing exploits with women and cooking recipes.Of the 20 examples struck in silver, some are impounded in institutional and museum collections, and several others are impaired, these facts confirming the fleeting bidding opportunity represented in our offering of this handsome piece.