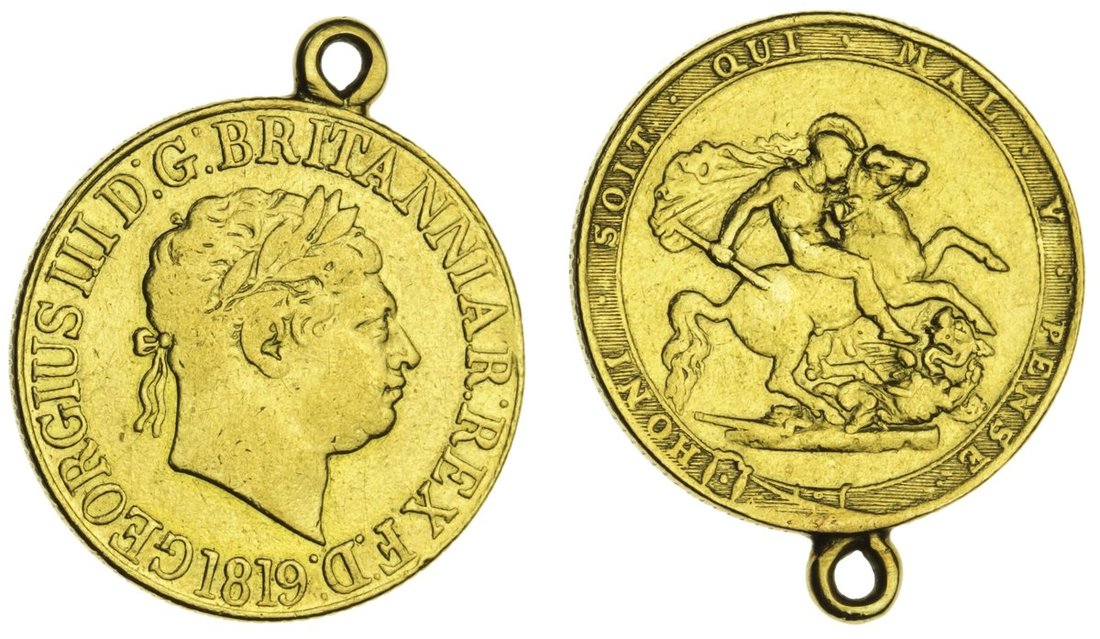 George III (1760-1820), Sovereign, 1819, laureate head right, rev. St. George and Dragon, edge milled, 6h (Murdoch III, - [cf. 194 ~ Proof]; Gibson 505; King -; Tood 165 [= Horan S3]; Bentley 941; Marsh 3 [R6]; MCE -; Spink 3785), a small soldered clasp mount on rim at 1 oclock, and the surfaces slightly porous from past cleaning, which is seen on three of the nine other currency examples known, otherwise a bold fine, a great rarity, highly prized amongst the British collecting fraternity, and rightly lauded as the rarest London Sovereign NGC FINE-Details ~ Mounted (Certification #5880289-001) https://www.ngccoin.com/certlookup/5880289-001/NGCDetails/ The 1819 Sovereign is well appreciated by the numismatic community today, having been highlighted at the Bentley dispersal (Baldwin 72, 8 May 2013, lot 941), and more recently by the Royal Mint Ballot last year. However the legacy of this now famous rarity is actually surprisingly short-lived, with official identification within the currency series not made until July 1964. The appearance of the discovery example in Seabys Coins and Medals Bulletin, enabled J. J. Cullimore-Allen, author of Sovereigns of the British Empire (1965) to document the date where the standard reference work Milled Coinage of England (1950) had not. In fairness to the latter authorship, in recent memory only one example of an 1819 Sovereign had passed through the saleroom - a Proof - at the Briggs dispersal in 1939, its whereabouts today remain unknown. Since then, examples of the date have appeared intermittently in commerce, with two reported in the 1970s; two in the 1980s, including the present specimen (on account of the vendors records); three in the 1990s; and a further addition to the corpus after the 2013 sale. Consequently the present corpus is believed to stand at 11 coins (10 Currency and 1 Proof), of which at least three as well as the present specimen exhibit signs of jewellery alteration. It is evident from the stylings of these mounts that the date itself has been recognised privately from at least the last decades of the 19th Century, probably by those who identified the significance of the year in relation to Queen Victorias birth. However, this information evidently did not feed through to Robert Lloyd Kenyon, who would also omit the date from his publication Gold Coins of England (London, 1884). Henry Noel Humphreys writing in 1849 draws a similar blank, with the additional unhelpful quip: Of this great recoinage of 1817匢 do not think it necessary to give examples, as all the coins then struck are still in circulation; and beautiful and very numerous specimens, I hope in the pockets and cash boxes of all my readers. However learned parties at the time also may have noted the report of Mr Martin. His national review of banks, building societies, railway stations, post offices and other high coin-exchange institutions reported only two examples for the date in over 105,000 Sovereigns studied. The result of his review into the level of wear encountered on the circulating specie prompted the ultimate withdrawal of pre-1838 Sovereigns and Half-Sovereigns and their subsequent demonetisation after the 28 February 1891 (London Gazette, 25 November 1890). In the same year, Joseph Clark, a tailor, of Mount Place, Whitechapel exhibited two Sovereigns of George III, of the years 1817 and 1819, in fine preservation to the British Numismatic Society. At least two potential origins exist for Clarks coin, the first is from the collection of F. R. N. Haswell of North Shields (Sothebys, 7-10 March 1888, lot 702 [part]) for which unfortunately no condition report is given. The second, and more likely source given the timing, appears from the census returns, which confirm that Clark was then a close neighbour of Michael Samuels, a pawnbroker. In spite of the Sotheby sale, this exhibition, and indeed the reappearance of the now mythic Proof in the Murdoch dispersal, Nelsons review on the Sovereign for the Spink Numismatic Circular in July 1904 continue to exclude the date. A correspondent, Henry Garside addressed this fault in the November volume, claiming to have been the proud possessor of an example, which lamentably he had since lost. The repeated false starts in documenting this date is not an uncommon occurrence in the study of numismatics, but has likely condemned many of the original ?,574 worth of Sovereigns coined in 1819 to the melting furnaces after their universal recall in 1891. Whilst it remains unclear if all the stated coins struck in that year bore the hallowed date, or indeed how many truly survive, analysis of Royal Mint records as well as the Boulton papers held by Birmingham City Archives has been undertaken in recent years, and provides key insights into the reason for their existence and period of manufacture. Lobbying by political economist David Ricardo gained renewed traction in early 1819, as the desire to return the British economy to the gold standard intensified after a 20-year hiatus under the Bank Restriction Act (1797). His proposal saw for the production of 60 ounce (1,700g) gold ingots to enable the Bank of England to begin redeeming its now heavily counterfeited banknotes for bullion. Certain controls would remain with the Bank however, as these ingots would only permit large exchanges of paper to bullion, and not merely individual Sovereign transactions. After several committee hearings, Ricardos recommendations were proposed and ratified under the Peel Bill or The 1819 Act for the Resumption of Cash Payments (2 July, 59 Geo. III, cap. 49). Work on the new dies had evidently begun at the mint by August, with Matthew Boultons later sketches showing a combination of matrices of the Crown, Halfcrown and Shilling in an unprecedented multi-hub arrangement. For the first time, these enlarged dies also feature the 1819-dated Sovereign, evidently struck from the same impression as the present coin. In all probability therefore, it is David Ricardo who we should thank for the creation of this now fabled London rarity, with the great historical irony being that he himself had conceived their use not for coin, but for the production of his now almost completely forgotten ingots.

If the Royal Mint engravers were able to create a serviceable Sovereign die in the first month after the act (the rushed nature possibly deduced from the subsequent use of a corrected 1819 over 8 Shilling die on the ingot), the five journeys of Sovereign production recorded at the Mint between August and November could conceivably have been achieved through the use of only the new 1819 dies.

Interestingly the origin of the bullion recorded for production is not from the Bank of England (the usual source), but from private businesses such as A F Haldimand and Co, stockbrokers and borrowers of Government debt. Where Haldimand obtained the gold bullion is not noted, but given the terms of Peels Bill, it is entirely conceivable that the company had already benefited from the exchange of their paper money, and now employed the Royal Mint to convert their bullion assets into physical coin. The entire output for the year would have required just 17 of Ricardos 2,000 proposed ingots, although in total only thirteen are recorded as actually having sold. Contemporary records provide a final key snapshot into the early circulation life of the 1819 Sovereign, as a Mint commission would investigate the silver alloy within the new gold specie a mere decade after the issue. One hundred specimens of each date were requested from the Bank of Englands reserves for a melting experiment, and all dates were satisfied except the 1819, where again only two were located.

They were subsequently excluded from the test, but their fate is otherwise unknown. By sheer coincidence, the renowned numismatist James Dodsley Cuff was operating in the Bank of Englands bullion office at the time, so it is probable that he was actively involved in this process. However rather mysteriously neither his bequest to the British Museum in 1839, nor his posthumous sales in June 1854 contained an example. In the 200 years to elapse since the creation of this coin, and through every false start and missed opportunity, a story of exceptional rarity, numismatic intrigue and economic history shines through. Fundamentally this renders an otherwise ordinary coin, extraordinary, not just for its date, but because of it what it symbolises. A foundation stone of the reinvigorated British economy, and a source of ignition for a subsequent century of global influence, the impact of which still shapes our world today. As a collector we may lament the decision taken by our Victorian forebear to mount this coin and harm its pure numismatic beauty, but as numismatic historians we should celebrate their foresight for undoubtedly saving her from the furnace for all to appreciate today.