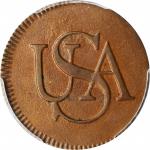 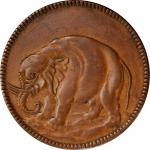 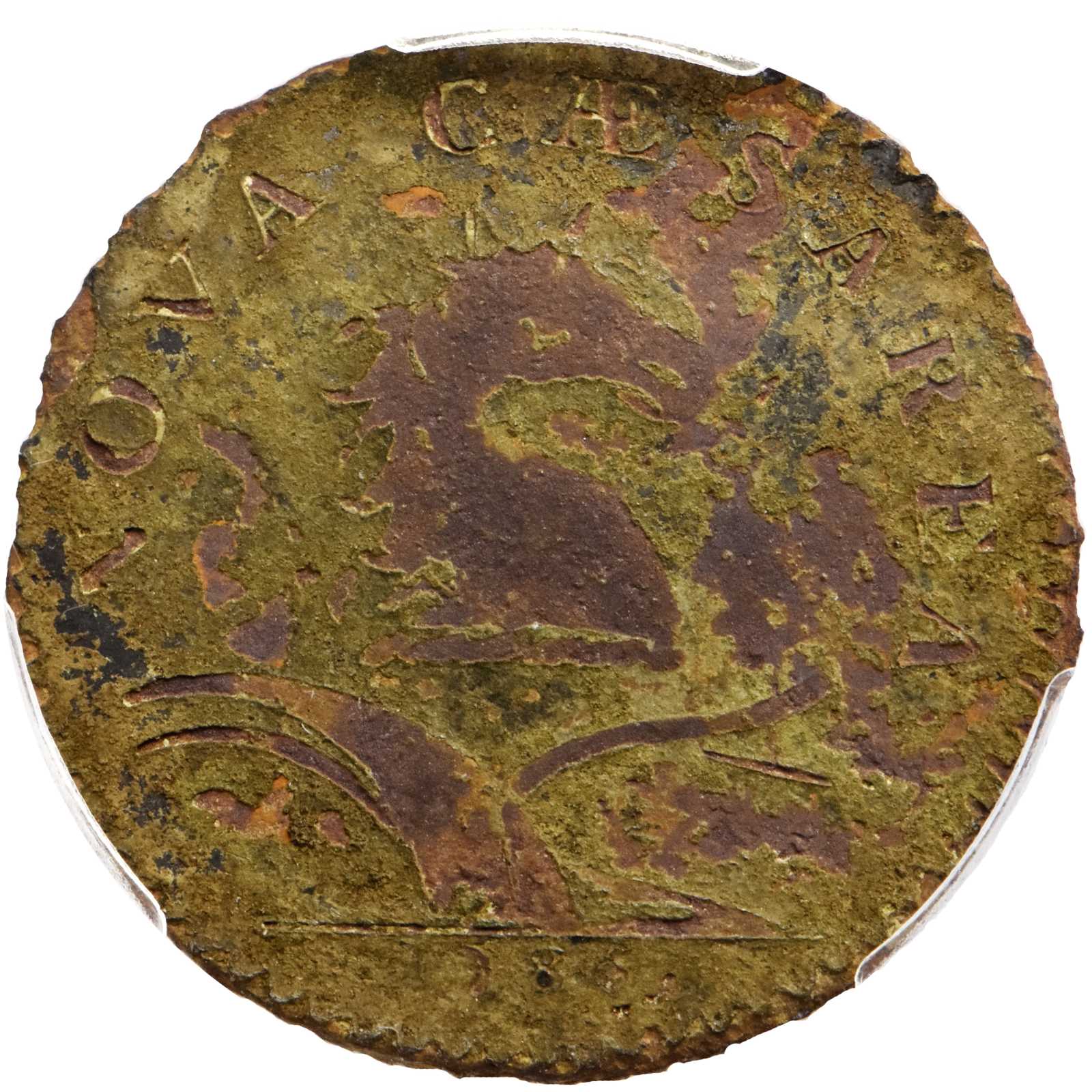 1786 New Jersey Copper. Maris 10 1/2-C, W-4765. Rarity-8. No Coulter. Fur Head. VG Details--Excessive Corrosion (PCGS).107.6 grains. Extremely Fine in terms of sharpness, though obscured by varying degrees of roughness from two centuries spent below ground. The design elements have been eroded away but are faithfully represented by incuse depressions of plum and sandy-brown shades. Strong distinction between the horse head and scroll combine with sharp legends and obverse denticles to suggest minimal circulation before becoming encrusted. The fields are distinguished by a mossy, olive-green patina on both sides. An historic new discovery representing just the second known from the Maris 10 ½-C dies.<p>This piece was unearthed circa 2017 by metal detectorist Chad Dabkowski near Plymouth, Massachusetts, but only recently identified as Maris 10 1/2-C in early 2020 with the help of Don Hartman, Roger Moore, Ray Williams and Wayne Shelby. It was first published in an article by Hartman in the Spring 2020 <em>C4 Newsletter</em> and we are thrilled to be offering it publicly for the first time ever, recognized for the major rarity that it is.<p>The Maris 10 1/2-C is a relative newcomer to the corpus of the New Jersey copper series, now totaling 144 distinct varieties. Not even the most advanced student of this series had the chance to own these dies before 1992, and the opportunity has not been presented again since 2001. The discovery piece was found in early 1992 by a New Jersey dealer in a mixed accumulation and was shortly thereafter confirmed by specialists Don Mituzas and Michael Hodder. Michael Hodder further detailed the discovery in an article in the July 1992 <em>Colonial Newsletter</em> and later went on to catalog the coin for our (Stack’s) January 1993 sale. It was featured in lot 990 and called Choice Fine with a weight of 110.8 grains. Hodder also offered a convenient chart comparing this new obverse 10.5 with the Maris 7 and 10 dies, helping to persuade those that initially deemed this obverse 7.5. After passing through the hands of R.E. Naftzger, Jr, the discovery piece eventually emerged in our (Stack’s) January 2001 sale of the William O’Donnell Collection and has most recently been reported in the collection of A. Buell Ish. <p><em>New Jersey State Coppers</em> (2013) authors Siboni, Howes and Ish suggest that both 8 ½-C and 10 ½-C “may have been struck toward the end of the New Jersey pattern period.” as “stylistically, [the obverses] seem to represent a transition between the patterns and the coins produced for regular circulation.” They also remark that "the one unfortunate thing about the "Fur Head" variety is that as a unique variety it can only be in one collection.” We are grateful for the opportunity reduce this misfortune and effectively double the known population with the present specimen, even if it still falls painfully short of demand. <p>Prior to the attribution of this piece, there were just 12 unique varieties among the 144 known, including Maris 4.5-pp, 7-C, 10-oo, 10.5-C, 11-G, 11-hh, 16-S, 38-L, 59-mm, 62.5-r, 73.5-jj, 80-ff. The 18-L was listed as unique by Maris himself in 1880 and was still consider so until the appearance of an example on eBay in January 2011 that sent shockwaves of excitement through the New Jersey copper community. It eventually sold for $105,655 and set a new record for a US Colonial sold in an online auction, according to an article in the March 2011 edition of <em>Coin World</em>.<p>It is remarkable to note that Maris 10 ½-C was missing from our historic November 2019 sale of the E. Pluribus Unum Collection of New Jersey Coppers. Authored by specialist John Kraljevich, this sale offered a stunning 110 varieties, including an astounding 8 examples from the Maris plate. While several Rarity-8 examples were featured therein, 10 ½-C had proven elusive to even this advanced collector.PCGS# 821171.Discovered by metal detectorist Chad Dabkowski near Plymouth, Massachusetts circa 2017. 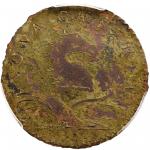 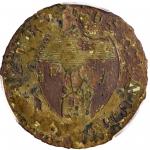