Library of titles by Q. David Bowers, all with personal inscriptions from the author:

Handwritten letter from John A. Nexsen to Lyman H. Low, dated August 19, 1905, regarding the Spier s

Browning, A.W. The Early Quarter Dollars of the United States 1796-1838, With a Few Remarks Concerni

Noehden, George Henry. Specimens of Ancient Coins of Magna Graecia and Sicily Selected from the Cabi 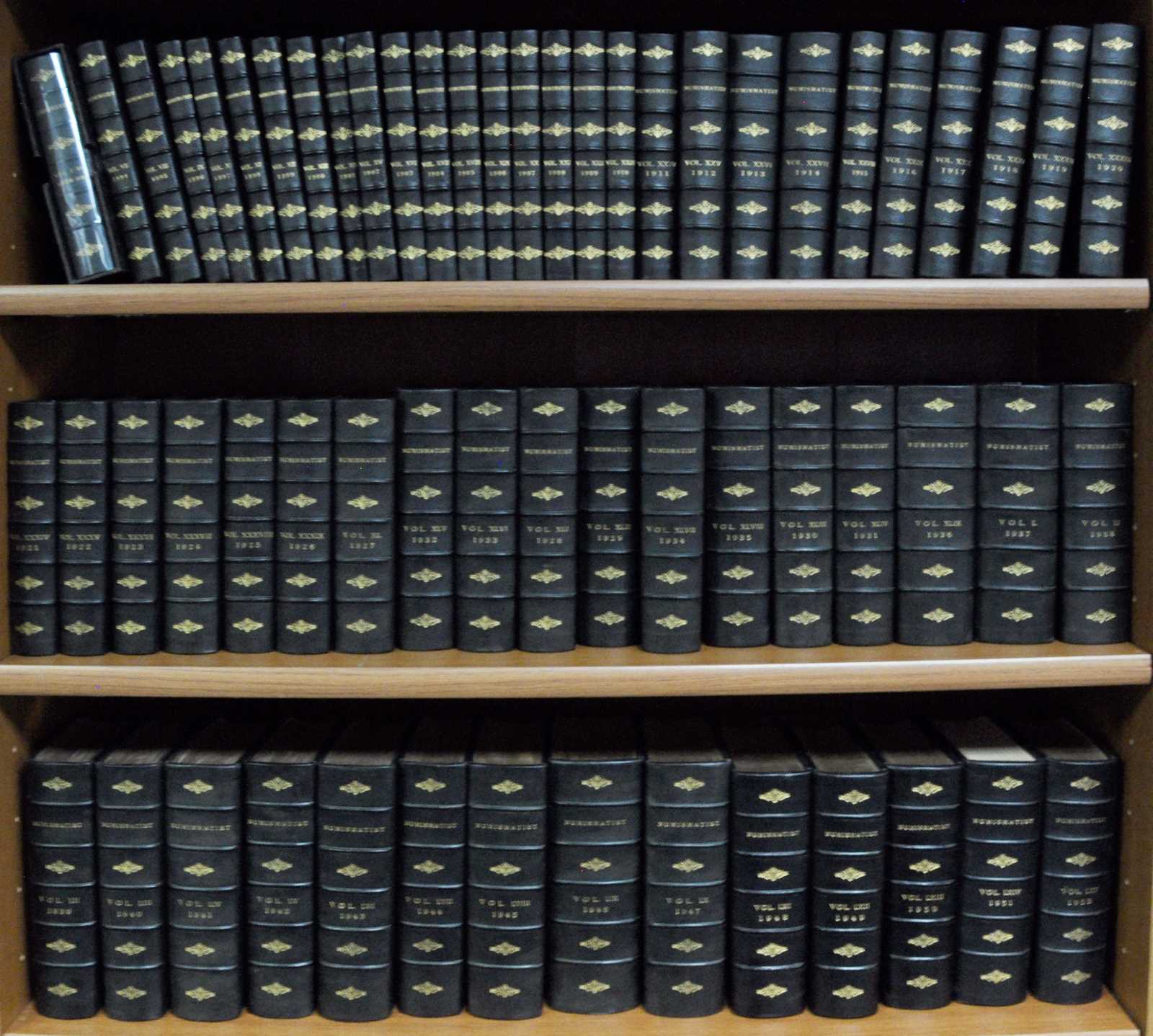 American Numismatic Association. The Numismatist. Volumes 1-65. 1888-1952. Very Fine.Octavo. A spectacular set of this long-standing publication. Hardbound in matching full black morocco, the front and back covers decorated with fillets and floral corner ornaments in gilt. Five raised bands divide the spines into six panels. The second with "NUMISMATIST" in gilt, the fourth with the volumes and respective date ranges in gilt, and the remaining panels with gilt floral ornaments. Heavy greenish gray paper flyleaves and pastedowns with gilt dentelles around the inside of each cover. Page tops boldly gilt.

Original covers bound in. Bookplate of rare book dealer Leonard H. Hartmann of Louisville, Kentucky, inside the back covers.<p>The first bound volume includes original copies of the prized first six volumes of <em>The Numismatist</em>, covering the years 1888 to 1893. The acquisition of this set alone is seen by many as the crowning achievement for an American numismatic library, as these rare volumes document to a degree the birth of the American Numismatic Association, sparking the vibrant camaraderie amongst collectors of all means that is still widely enjoyed today through its promotion. Dr. George F. Heath, of Monroe, Michigan, began the publication years before the Association was formed, primarily as a vehicle to sell some coins, but also to encourage the exchange of ideas, scholarship and goods between collectors who were far away from major cities and the active numismatic organizations found there, such as the American Numismatic and Archaeological Society formed in New York in 1858.

In Volume 3, No. 1, the first edition of 1891, Heath included a new section, "Our Numismatic Directory," apparently built from his growing list of subscribers, intended to promote their intercourse on all things numismatic. He noted that the names would appear only once, that they would be reliable, and that the addresses had been verified. Later in the year, a "Dealers Directory" would also be added.<p>A few pages of the earlier editions of this set have small ink edits or notations, the latter mostly associated with "Our Numismatic Directory" entries. Some notes indicate that the writer had attempted correspondence with certain other collectors as indicated by notes such as "no answer," while other edits identify dealers or those deceased. This alone is an interesting glimpse into early efforts of one of Heaths subscribers to correspond and trade with others, and clear evidence that Heaths brainchild was serving his intended larger purpose.<p>In Volume 3, Nos. 3 & 4 (February 1891), on page 12, Dr. Heath posed these questions in print:<p>"Whats [sic] the matter of having an American Numismatic Association? Would it be profitable? Would it be practical? All in favor of such a scheme, send your names."

A few responses were published in the June 1891 edition, including that of William G. Jerrems, Jr., of Chicago, who wrote, in part: "I am in favor of a National Society…I shall be glad to hear that such a society is being formed, and will give it all the aid that I can." Jerrems, along with Dr. Heath and three other enthusiastic collectors met in Chicago in October, 1891, and there founded the American Numismatic Association. Jerrems was named the first president of the organization.<p>Two editions of the historic year, 1891 (Volume 3, No. 11 & 12, and 13 & 14) bear the rose-colored name stamp of William G. Jerrems, Jr. on their covers, certainly identifying these as his copies. His address, given in his own "Our Numismatic Directory" listing, was in the Lakeside Building in Chicago, Illinois. As such, Jerrems own copies formed the basis for this set, though it extends beyond his passing in December 1945. As such, this is a particularly historic set of <em>The Numismatist</em>.

Aside from the noted marks, there are a few light stains and gentle folds through the centers of many pages (seemingly from the thin early volumes being folded in half to be carried in a pocket), but these have little effect on the overall aesthetic. For the most part, the interior is nicely preserved. There is a slight separation inside the front cover in the pastedown and flyleaf joint, but the binding remains tight. This bound volume includes the library bookplates of A. Murl Kimmel on the flyleaf and Harry W. Bass, Jr. on the inside front cover. This volume also has a custom black slipcase.<p>As noted above, this is part of an extensive set of <em>The Numismatist</em>. The set includes Volumes 1 to 65, covering the publication years 1888 to 1952, all handsomely bound in matching black full morocco. Many volumes include a small piece of lined yellow paper with research notes in the hand of John Adams, highlighting entries he found of particular historical interest. These alone are interesting to study. Only the first two books of the set include the Bass bookplate, and only the first book, the <em>first six</em> set, has the Kimmel bookplate. The quality is exceptional throughout, and just like the bindings, the interiors match beautifully in quality. This set was among the highlights of the extensive Harry W. Bass, Jr. reference library, sold by George Kolbe in 1999, where it realized $27,000.From the D. Brent Pogue Library. Earlier ex William G. Jerrems, Jr. (in part); A. Murl Kimmel; Leonard H. Hartmann; John W. Adams, George Frederick Kolbe, June 1990, lots 202-203; Harry W. Bass, Jr., George Frederick Kolbe, September 1999, lot 5; Craig and Ruanne Smith Library, George Frederick Kolbe, June 2005, lot 68.