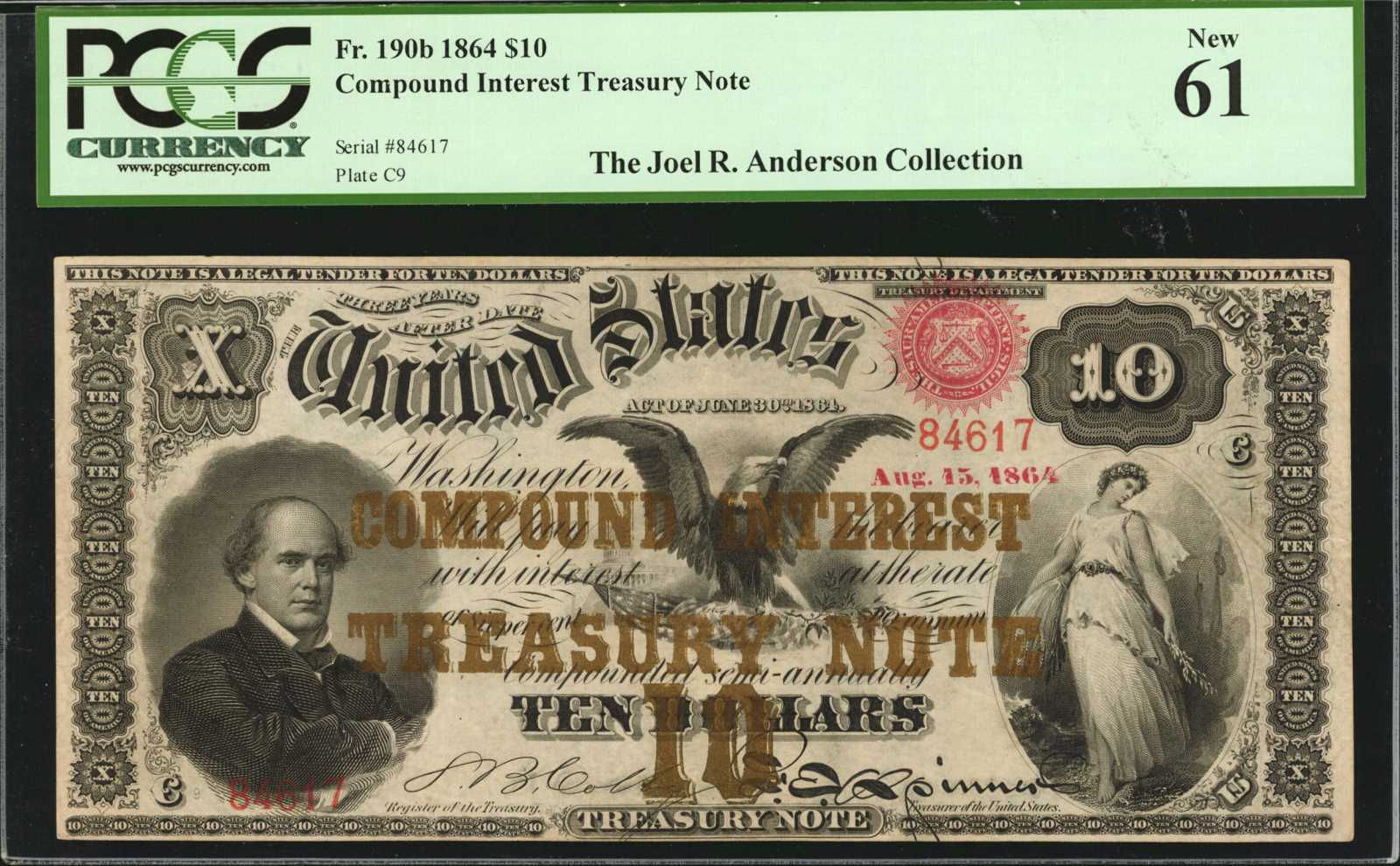 Fr. 190b. 1864 $10 Compound Interest Treasury Note. PCGS Currency New 61.We had the pleasure of offering this note in our 2018 March Baltimore sale as part of the Joel R. Anderson Part I collection where we described it as:<p>"Just two notes from the entire series of Compound Interest Treasury Notes have been certified as Uncirculated by PCGS or PMG according to their respective population reports. Both of those notes are this variety, Fr. 190b (W-1236). This piece is fully margined with bright paper and excellent bronzing of the security "overprint" (see details below). The large format design features the portrait of Salmon P. Chase at left and an allegorical female at right representing Peace. At the center is a rather familiar eagle with spread wings motif. Though this looks very much like that later used on the 1899 Black Eagle Silver Certificates, it is in fact a different engraving with minor design differences. Around 100 examples of this catalog number are known and the present note is the second finest certified.<p><p>$10 Compound Interest Treasury Notes of 1864<p><p>Similar to certain other currency, including the series already showcased here, Compound Interest Treasury Notes were intended to raise money to fight the Civil War. In contrast to the usual procedure of contracting with the American Bank Note Co. and the National Bank Note Co., these were printed by the National Currency Bureau in the Treasury Department Building and were made in denominations up to $1,000, with $10 being the lowest. The face has the same motifs as the $10 Interest-Bearing Notes of 1863, with Salmon P. Chase, Eagle of the Capitol, and Peace. At the time Spencer M. Clark was in charge of the department, engendering accusations of scandal, a scenario described in the Whitman Encyclopedia of U.S. Paper Money.<p><p>Compound Interest Treasury Notes of the $10 denomination were issued under Acts of March 3, 1863, and June 30, 1864. Notes bore interest at the rate of 6% per year, for three years. When each note was given out it had the issue date stamped on it in red. Accordingly, these vary among notes examined today. All notes in this series were printed on four-subject plates lettered A to D, each with the same serial number. The highest issued provable print quantity can be calculated by multiplying the highest known serial by four. These are slightly larger than Legal Tender Notes and measure 3½ by 7½ inches.<p><p>On the face is the imprint "COMPOUND INTEREST / TREASURY NOTE" in bronzing powder, a deterrent to counterfeiting, it was thought, but very difficult to apply. In the Treasury building a special room was set aside for this purpose. This was the first impression to be made on the sheet, although it is sometimes referred to as an "overprint." The bronzing powder, most familiarly used on Fractional Currency, tended to flake and deteriorate, with the result that many extant notes have imperfect imprints.<p><p>On the back, printed in green, is a schedule of redemption, totaling $11.94 if the bill were to be held for the full three years. Bills of this type were mostly bought as investments by financiers and banking institutions, not used in general commerce by the public. As these bills did not accrue interest after the expiration date, most were redeemed at the end of three years. Interest on the bills authorized in 1863 ceased on June 10, 1867, and interest on those authorized in 1864 ceased on May 16, 1868.<p><p>At the expiration of the interest period nearly all were turned in to the Treasury Department. Of the 677,940 issued for all denominations-a truly incredible quantity-only 2,171 remain unredeemed today. Fewer than 150 of these have been identified in numismatic hands and many are likely lost for good. Most extant examples show extensive wear, which invites further investigation, as one would think that most such notes were put away and saved."<p>The note sold for seemingly good value when it realized $91,000 in that sale. This represents another great opportunity to acquire one of the finest Compound Interest Notes in existence. <p>Provenance:Joel R. Anderson Collection of United States Paper Money, Part I. Earlier from Lyn Knights sale of August 2000, lot 475; Heritage Auctions sale of May 2005, lot 16675.