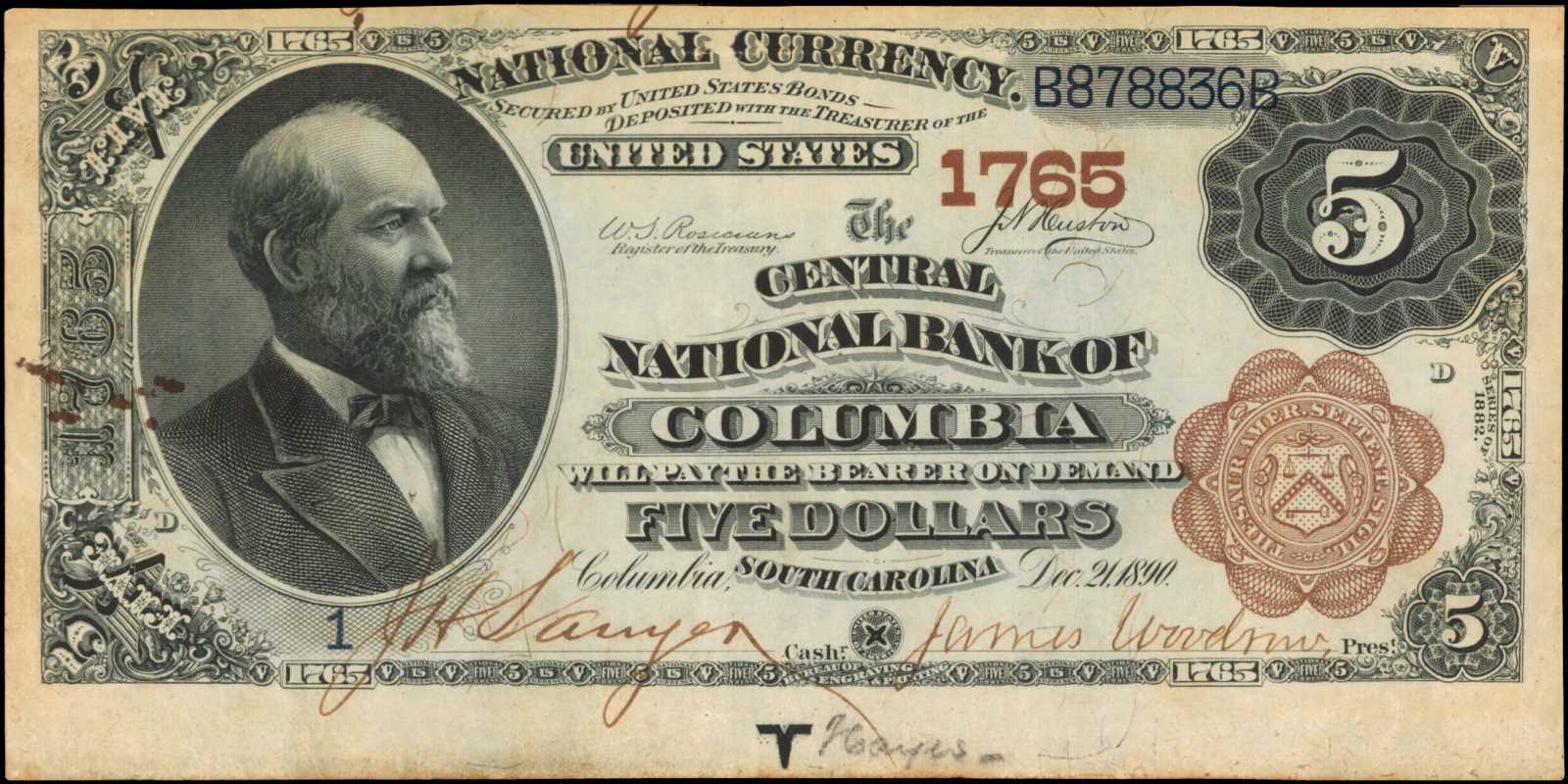 Columbia, South Carolina. $5 1882 Brown Back. Fr. 471. The Central NB. Charter #1765. PMG Extremely Fine 40. Serial Number 1. It has now been more than 17 years since a truly great South Carolina national banknote has appeared at auction. In January 2003 the world record price for SC numismatics was set by the serial #1 Chester first charter five. That note sold for $89,125 to the now deceased Roy Pennell. It, like the note offered tonight, was completely new to the census and available to the collecting community for the first time ever when it originally sold. It is a fun pastime to discuss the "best" notes on each state.

And while surely the most valuable SC national is the unique for type first charter $100 on Charleston, one could soundly make an argument that this serial #1 brown back should be in the conversation for one of the best on the state.It is not listed in the official census, but it is common knowledge among informed collectors that another serial #1 $5 brown back from this same charter is held in the most advanced collection of SC nationals. The other note, while equally rare, is circulated, has a poor trim, and blurry signatures.

The note we are offering is complete with a bottom selvage and lovely signatures. PMG assigns a grade of 40 and mentions rust, both of which are accurate, but do nothing to deter the appeal of such a special item.James Woodrow signs as the bank president. Woodrow (the uncle of President Woodrow Wilson) was born in England but rose to prominence in South Carolina as a well-regarded Presbyterian theologian. He was also the president of the University of South Carolina from 1891 to 1897. He was the president of The Central National Bank of Columbia for three years prior and four years after his stint at USC. As was commonplace, especially in Southern and Western banks, the president position here was clearly more of a figurehead title to a local person of renown, given mostly to help business connections. Jerome H Sawyer was at the bank from 1875 until it closed in 1901. During that time period he was the signing cashier.

It is very safe to assume that despite the lessor title of cashier, Sawyer was certainly responsible for managing the day to day operations of the bank.While the bank rarity and serial number are the main attractions, lets not discount just how difficult it is to find an interesting $5 brown back on SC. A mere dozen are listed in the census. Nine are from Charleston; one is a very low grade circus poster from Rock Hill, and another is a forgettable example from another Columbia bank.

The best piece listed in the census is a serial #8 from Batesburg and that is tied up in the South Carolina History Museum Holdings!It is very difficult to assign an accurate value to such a rare banknote from a closely held state like South Carolina. One would be hard-pressed to find more than two or three auction results for the top 20 best SC banknotes that have traded hands over the past 30 years. The best of the best so often gets placed privately without any publicly available pricing information.

With that said, we feel comfortable with a $50,000 to $100,000 estimate. After this opportunity passes tonight, it will be impossible to find another serial #1 brown back for sale on South Carolina.