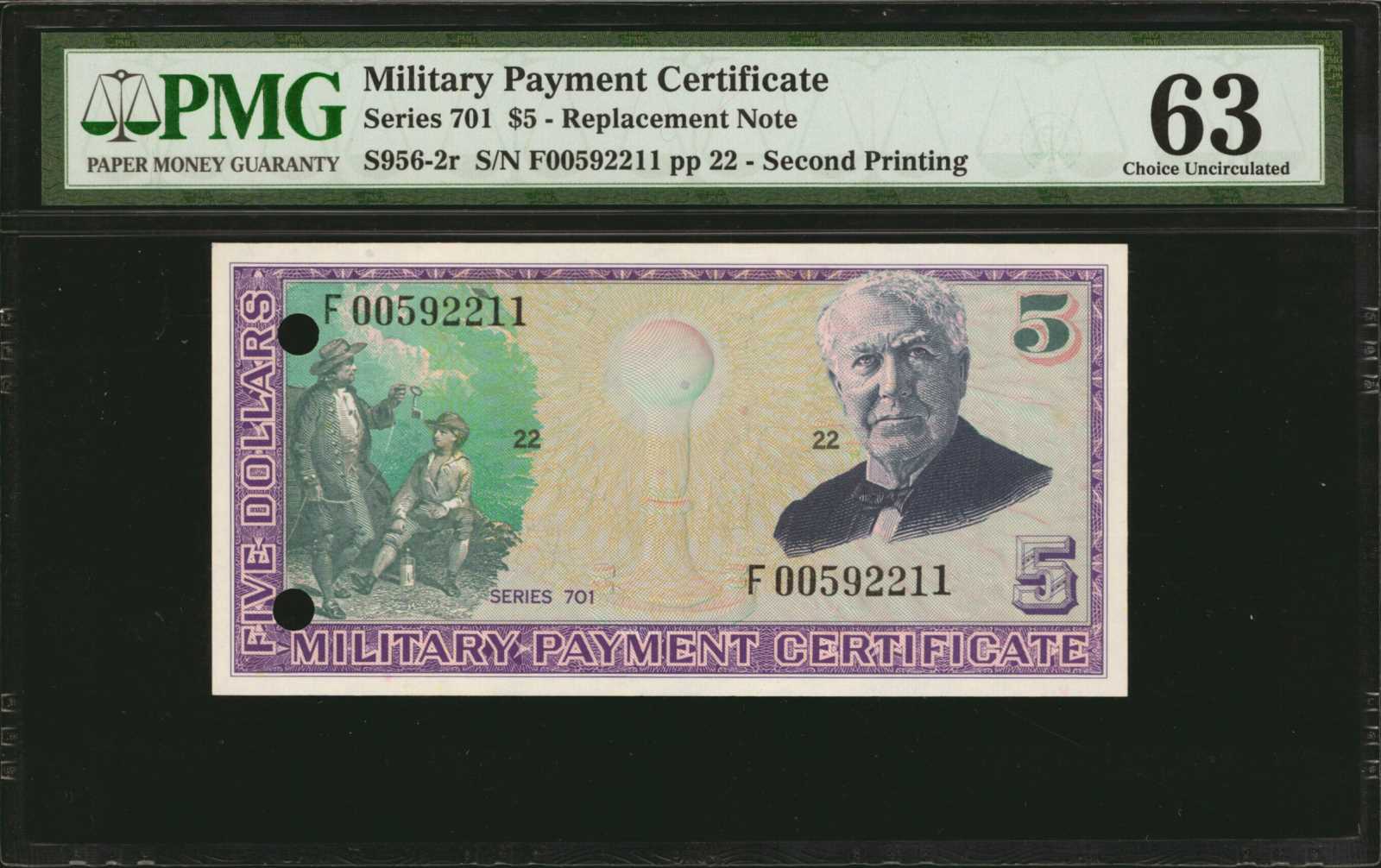 Military Payment Certificate. Series 701. $5 Replacement Note. PMG Choice Uncirculated 63. Portrait of Thomas Edison at right. At left is a variation of the vignette Franklin and Electricity. An early light bulb "illuminates" the center of the note. A striking depiction of Mount Rainer is found on the verso. Most importantly, serial number F00592211 graces the face of the note at top left and bottom right. The absence of the suffix letter signifies that this choice five is a replacement note. To our knowledge this is the first confirmed example of a Series 701 Replacement note of any denomination. At the time that Series 701 was printed at the Bureau of Engraving and Printing, Army finance officials had planned that it would replace Series 692 in Vietnam. Between the time that Series 701 was ordered and delivered, the restrictions on the use of coins in Vietnam had been lifted and fractional MPC quickly disappeared from circulation because the troops hated the small denominations. The Army then scrapped plans to issue the Series 701 notes altogether. The US Army had held the entire production of the series until 1991 when the US Treasury demonetized the series. It has long been believed that all of the fractional denominations and all replacement notes had been destroyed. This assumption has been supported up until now with no appearances of non-specimen notes below the $1 denomination and a complete absence of any replacement notes for the series. Some circulating examples of the $1, $5, $10 and $20 denominations escaped destruction and have been known to collectors for more than 20 years now. However, no Replacement notes from this series have ever surfaced until now. This example is broadly margined and completely crisp. The colorful inks are all printed in great detail. This example has two punch hole cancellations at the left end, likely a form of cancellation or possibly for internal display usage by the Army or Treasury Department. PMG mentioned "Punch Holes" on the back of the holder and we assume that is why they have elected not to assign an EPQ designation though in our opinion the paper is wholly original and free of any impairment. This is certainly one of the most exciting discoveries in the field of MPC in recent memory. It is hard to ascertain a proper estimate for an item that was believed to be non-existent until just recently but we suspect somewhere in the range below is a safe start.