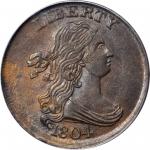 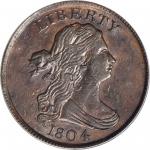 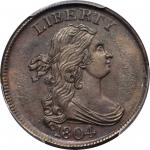 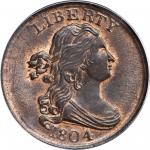 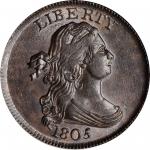 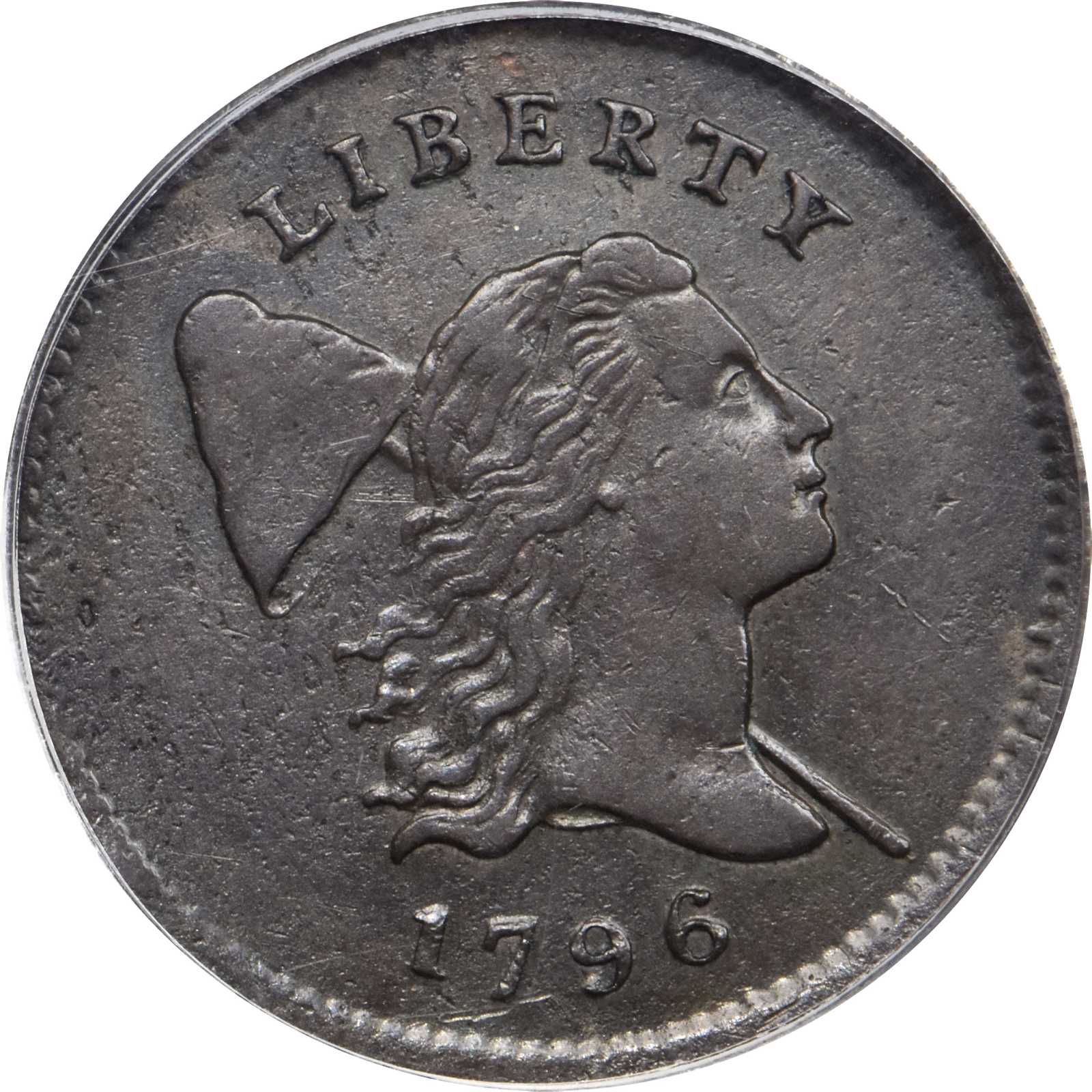 1796 Liberty Cap Half Cent. C-2. Rarity-4. With Pole. Thin Planchet. AU-55 (PCGS). Type: Type III: Liberty Cap, Head Right, Small Head.Design: Obv: A head of Liberty with flowing hair faces right, a liberty cap and pole behind. The word LIBERTY is inscribed along the upper border and the date 1796 is below. The portrait on Liberty Cap half cents dated 1795 to 1797 is noticeably smaller than for the Head Right issue of 1794, and it constitutes a distinct type. Rev: A wreath surrounds the denomination HALF CENT, the legend UNITED STATES OF AMERICA around the border and another expression of the denomination, 1/200, below. A ribbon knot with double bow binds the base of the wreath.Weight Standard: 84 grains (5.44 grams). Manley reports a range of 74 to 82 grains from a survey of extant examples of both die varieties of the 1796-dated issue. There is, however, a unique 1796 C-2 half cent, attributed as Breen-2b, struck on a thick planchet that weighs approximately 105 grains. Breen asserts that the planchet stock for that coin is a cut down spoiled large cent, although this is unconfirmed. Diameter: Approximately 23.5 mm.Die Variety: Cohen-2, Breen-2a, Gilbert-1. Obv: Readily attributable by the presence of the pole, close inspection with a loupe also reveals faint repunching to the digit 9 in the date. This is the only known use of this obverse die. Rev: Single leaf at the top of each branch in the wreath, four berries on the left branch, three on the right branch; there is a berry on the left side of the bow, but not on the right side. A leaf point is directly below the letter I in UNITED. This die was also used in the 1796 C-1 pairing.Cohen-2 corresponds to the With Pole <em>Guide Book</em> variety of the 1796 half cent.Die State: Manley describes only a single die state for the 1796 C-1 variety. Obv: Perfect. Rev: Perfect.Edge: Plain.Mintage: The <em>Guide Book</em> provides a mintage of just 1,390 coins for both varieties of the 1796-dated issue, which figure corresponds to the Mints delivery of half cents on October 14, 1796. Some numismatic scholars question this total and believe that some or all of the half cents delivered on April 19 (3,350 coins) and/or June 8 (1,740 coins) were also dated 1796. If so, the mintage for this issue could be as high as 3,140 coins (June 8 and October 14 deliveries only) or 6,490 coins (all three deliveries), although a mintage of 1,390 coins is the generally accepted figure.Estimated Surviving Population for the Issue: 100 to 230 coins in all grades.Estimated Surviving Population for the Die Variety: Rarity-4: 75 to 200 coins in all grades.Strike: An impressively well defined example, the individual strands of Libertys hair are bold to sharp with all other design elements on that side crisp. On the reverse the wreath, denominations and legend are equally sharp. The strike is basically complete around both sides, although it is a bit tight to the upper left obverse and lower left reverse with the denticulation thin in those areas.Surfaces: Richly toned in deep olive-copper, intermingled golden-brown and reddish-rose highlights are evident here and there. The surfaces are satiny in texture, hard and tight, with a smooth and pleasing appearance. Careful scrutiny with a loupe reveals little more than wispy handling marks and a few microscopic planchet pits. Thin grazes over Libertys forehead, at the top of the head and at the base of the digit 7 in the date are the most useful identifiers.Commentary: With no more than 200 coins believed extant in all grades, the 1796 is the rarest date in the entire half cent series of 1793 to 1857. Most survivors are from the C-2 dies, as here, examples of which have been honored rarities ever since numismatics became widely popular in the 1850s. Since then the appearance of a 1796 has been a special occasion.Although not as rare as its C-1 No Pole counterpart, the 1796 C-2 is still very scarce in an absolute sense. Perhaps surprisingly for such an elusive variety, there are several Mint State coins known, including at least three Gem Red and Brown coins. One of these, the D. Brent Pogue specimen in PCGS MS-66 RB, realized $470,000 as lot 3009 in our February 2016 sale. Another is the PCGS MS-65+ RB from the Missouri Cabinet, which sold for an extraordinary $718,750 in Larry & Ira Goldbergs January 2014 sale of that collection. Beyond the handful of Mint State coins, however, the census for this variety quickly drops down to the lowest circulated grades, and individual coins at those levels are usually dark and porous. Our offering of this smooth, attractive and sharply defined Choice AU represents an important bidding opportunity.Planchet stock for this variety was derived largely from rolled sheet copper, at least two of the survivors with Mint-made planchet clips. Whether the C-1 or C-2 was struck first remains a matter of debate, although we believe that the former with its cracked obverse die with no pole was produced first and used as a stopgap measure, until the well made obverse of the C-2 pairing was made ready for coinage. From the ESM Collection. 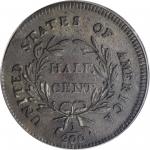