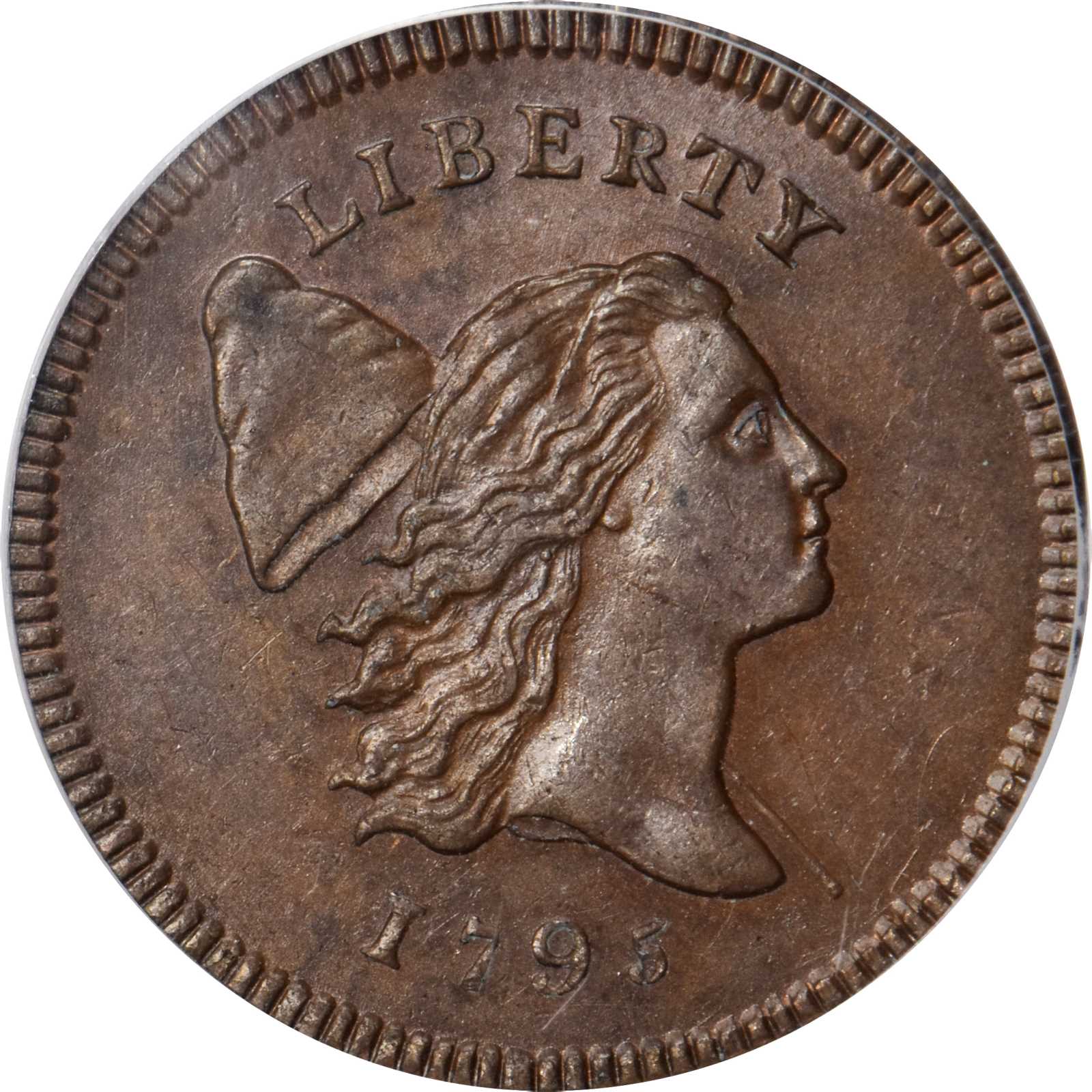 1795 Liberty Cap Half Cent. C-1. Rarity-2. Lettered Edge, With Pole. MS-62 BN (PCGS). Type: Type III: Liberty Cap, Head Right, Small Head.Design: Obv: A head of Liberty with flowing hair faces right, a liberty cap and pole behind. The word LIBERTY is inscribed along the upper border and the date 1795 is below. The portrait on Liberty Cap half cents dated 1795 to 1797 is noticeably smaller than for the Head Right issue of 1794, and it constitutes a distinct type. Rev: A wreath surrounds the denomination HALF CENT, the legend UNITED STATES OF AMERICA around the border and another expression of the denomination, 1/200, below. A ribbon knot with double bow binds the base of the wreath. The device punches used for the dies of this issue are attributed to Assistant Engraver John Smith Gardner, and they represent a refinement of the basic Liberty Cap, Head Right design executed by Engraver Robert Scot the previous year.Weight Standard: 104 grains (6.74 grams). Manley states that most examples coined from the C-1 dies weigh slightly more than the authorized standard. A few examples of this die variety are also known on extra thick planchets weighing up to 119 grains, including the Eliasberg specimen (Bowers and Merena, May 1996, lot 401), which weighs 116.3 grains.Diameter: Approximately 23.5 mm.Die Variety: Cohen-1, Breen-1, Gilbert-1. Obv: The pole is weak, and the same device punch used for the letter I in LIBERTY was also used for the digit 1 in the date (I795). A later state of this obverse die was used in the C-5a/5b and C-6a/6b pairings. Rev: Single leaf at the top of each branch in the wreath, four berries in each branch, the letters H in HALF and N in UNITED are repunched. There is a berry in the wreath at each of the ribbon bows, and a tiny jagged die break is present in the denticles outside the letters ED in UNITED. This die was also used in the C-2a/2b pairing.Cohen-1 is the only die marriage that corresponds to the Lettered Edge, With Pole <em>Guide Book</em> variety of the 1795 half cent.Die State: Manley 1.0. Obv: Perfect. Rev: Perfect, without the bulge than eventually forms through the letters AME in AMERICA. This is the usual die state among extant 1795 C-1 half cents.Edge: Lettered: TWO HUNDRED FOR A DOLLAR, followed by a single leaf.Mintage: The <em>Guide Book</em> provides a mintage of 139,690 coins for all varieties of the 1795-dated issue. The C-1 and C-2a Lettered Edge are believed to be the only varieties actually struck during calendar year 1795. Their combined mintage of 25,600 coins is from two deliveries:-October 27: 14,800 coins, believed to be from the C-1 dies (Lettered Edge, With Pole <em>Guide Book</em> variety)-December 1: 10,800 coins, believed to be from the C-2a dies (Lettered Edge, Punctuated Date <em>Guide Book</em> variety)Estimated Surviving Population for the Issue: 2,100 to 6,500 coins in all grades, for the entire 1795-dated issue. The estimate population for both die marriages of the Lettered Edge variety is 800 to 2,600 coins in all grades.Estimated Surviving Population for the Die Variety: Rarity-2: 600 to 2,000 coins in all grades.Strike: Libertys portrait on the obverse is delineated in such detail as to be definitive for the design. In the field above, LIBERTY is likewise bold, as is the date 1795 below. Central detail on the reverse is bold to sharp, and the denticulation around both sides is uniform and crisp.Surfaces: This is a handsome piece, with both sides displaying a hard satin texture. There are modest hints of semi-reflectivity. in the fields. Warm autumn-brown patina blankets the obverse, as well as the lower third of the reverse; the balance of the reverse is toned in deeper steely-copper. Apart from the toning on the reverse, a faint pin scratch in the lower obverse field from behind Libertys chin to the border near the end of the pole serves as a useful identifier.Commentary: This issue represents a distinct type in the early half cent series, the Small Head variant of the Liberty Cap, Head Right design. The device punch for Libertys portrait -- attributed to John Smith Gardner, as above -- was used for all half cent obverse dies prepared through the end of the Liberty Cap series in 1797. The punch included Libertys portrait and the cap, but not the pole, which had to be hand cut into each working die -- something that was not always done! (See below for our offering of the famous 1796 C-1 No Pole half cent in the ESM Collection.) Planchet stock for the 1795 Lettered Edge variety is quite good, the blanks made from sheet copper rolled out from ingots.Popular for type purposes, the C-1 variety vies with C-6a as the most plentiful of the date, and it is more readily obtainable than C-2a, the only other Lettered Edge die pairing of the 1795-dated issue. As the only die marriage that corresponds to the Lettered Edge, With Pole variety, of course, the inclusion of a 1795 C-1 half cent is required for completion of a half cent collection by <em>Guide Book</em> variety. Although Manley states, "Many high grade specimens of this variety are known, including some Mint States pieces," the latter are rare in an absolute sense and probably number on the order of just a dozen or so coins. Advanced collectors compete vigorously on the few occasions when an attractive Mint State 1795 C-1 half cent, as here, appears at auction. From the ESM Collection. Earlier from our (American Numismatic Rarities) Allison Park Collection sale, August 2004, lot 21; Heritages CSNS Signature & Platinum Night Auction of April 2011, lot 5011. 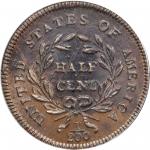