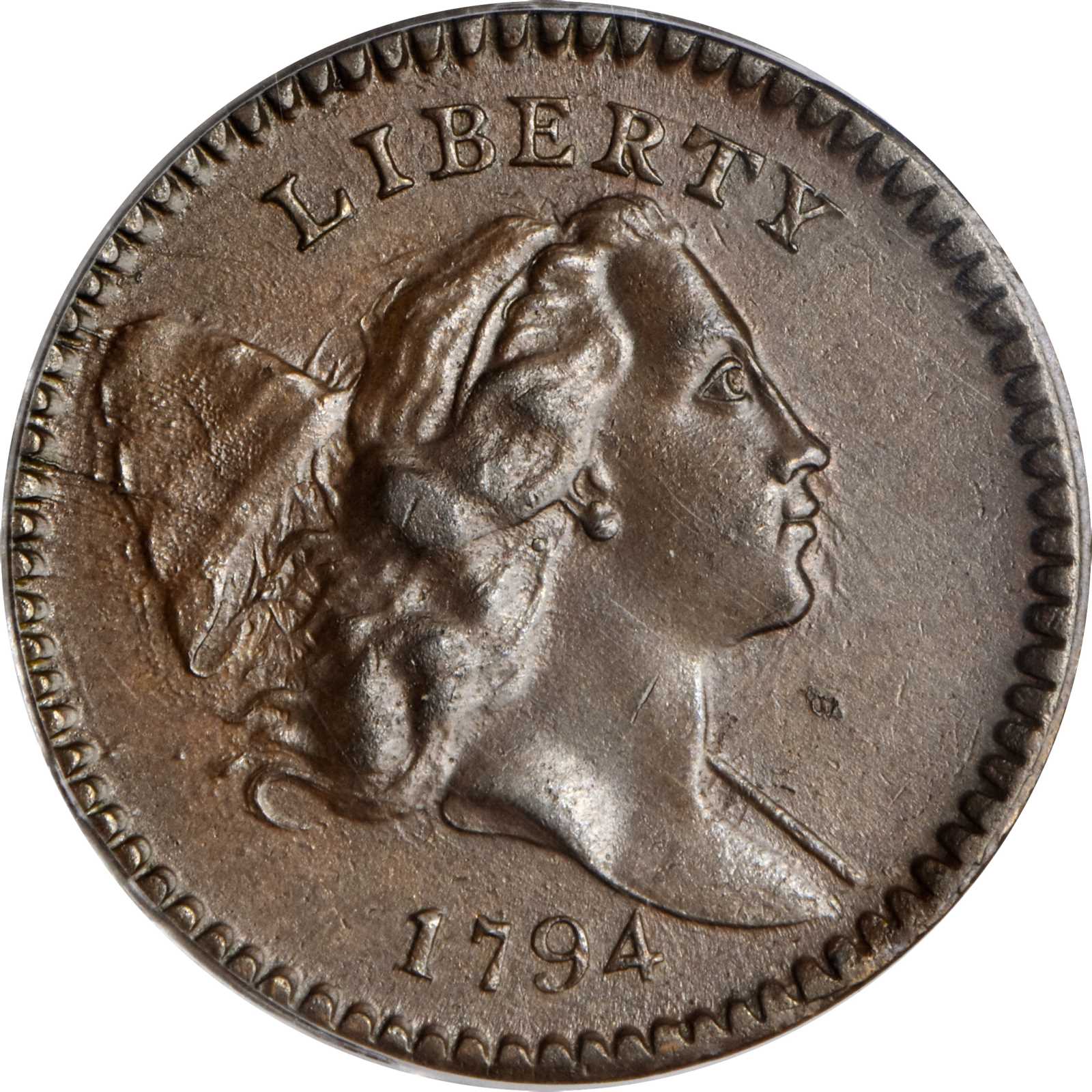 1794 Liberty Cap Half Cent. C-9. Rarity-2. High-Relief Head. MS-63 BN (PCGS). CAC. Type: Type II: Liberty Cap, Head Right, Large Head.Design: Obv: A head of Liberty with flowing hair faces right, a liberty cap and pole behind. The word LIBERTY is inscribed along the upper border and the date 1794 is below. Libertys portrait for the 1794 is noticeably larger than on the Liberty Cap half cent issues of 1795 to 1797. Rev: A wreath surrounds the denomination HALF CENT, the legend UNITED STATES OF AMERICA around the border and another expression of the denomination, 1/200, below. A ribbon knot with double bow binds the base of the wreath. The dies for this issue were engraved by Robert Scot, possibly after a design by Joseph Wright.Weight Standard: 104 grains (6.74 grams). Manley states that a survey of reported weights for 1794 half cents revealed a range of 90 to 112 grains, with an average of 103 grains. The author also states that, in general, 1794 half cents are slightly wider and thinner than their predecessors from 1793.Diameter: Approximately 23.5 mm.Die Variety: Cohen-9, Breen-9, Gilbert-1. Obv: Libertys portrait is in high relief, the digit 4 in the date almost touching the base of the bust. This is the same die used in the C-7 and C-8 pairings. Rev: Breens "Heavy Wreath" variety with five berries on the left branch, four on the right. There are no berries below the letter F in OF or between that letter and the first letter A in AMERICA. The letter T in CENT leans left and there is minor repunching to the letters D in UNITED, the first T in STATES, and O in OF. The same reverse as the C-2a and C-2b attributions.Along with C-7 and C-8, C-9 corresponds to the High-Relief Head <em>Guide Book</em> variety of this issue.Die State: Manley 3.0. Obv: Die cracks are evident from the border near 9:30, through the liberty cap and into the hair, as well as through the top of the letters IBERTY in LIBERTY. Light clash marks in the right field extend from Libertys nose to chin. Rev: A border beak just past 6 oclock obscures four or five denticles left of the digit 2 in the fraction. This is a scarce die state, and the latest known to Manley.Edge: Small Letters: TWO HUNDRED FOR A DOLLAR, followed by a single leaf.Mintage: The accepted mintage for this issue is 81,600 coins, achieved in five deliveries during early to mid 1794:-February 22: 10,000 coins-June 4: 16,000 coins-June 26: 16,000 coins-June 27: 16,000 coins-July 8: 23,600 coinsEstimated Surviving Population for the Issue: 2,300 to 6,500 coins in all grades.Estimated Surviving Population for the Die Variety: Rarity-2: 600 to 2,000 coins in all grades.Strike: This is a sharply struck coin for the variety, although the high relief of Libertys portrait means that examples from the C-9 dies are typically seen with some softness within the hair, as here. Centering is good, especially on the obverse, where the denticulation is universally bold. On the reverse, virtually all leaf details are sharp, the denticles heavier on the right and lighter at the lower left, but all are present.Surfaces: Satiny light brown surfaces are glossy and smooth, with pale champagne-pink undertones on both sides. A small nick in the lower right obverse field and thin graze on Libertys neck are mentioned solely for identification purposes. Both the quality and eye appeal are exceptional for a survivor of this challenging and underrated Liberty Cap half cent date.Commentary: Cohen-9 is an excellent candidate to represent the High-Relief Head Guide Book variety of the 1794 half cent in a type set, as it is the most available die marriage of the issue after only the C-2a Normal Head (a.k.a. Low-Relief Head). Only about a dozen Mint State coins are known, however, confirming the conditionally rare status of this variety. The present example, with a particularly impressive provenance, has an EAC grade of MS-60 and is tied for CC#2 in the Grellman census, and tied for CC#1 in the Noyes census.This is our third offering of this beautiful and significant 1794 C-9 half cent since 1996. When he cataloged this coin for our (American Numismatic Rarities) July 2004 sale of the Oliver Jung Collection, Q. David Bowers stated:<em>"The present piece is one of the cataloguers (QDBs) all-time favorites in the Oliver Jung Collection, not because the 1794 is a famous rare date, for it is not, but because when half cents of this year are found they are typically quite miserable. As the specialist knows well, examples of the date are typically on porous planchets, dark, and often indistinct. Exactly why has not been determined, but probably the copper stock used this year was mostly of a poor quality (quite unlike that used for 1793, which typically is found in high quality)."</em>The poor planchet stock obviously goes a long way toward explaining the conditionally rare nature of the 1794 Large Head type, as recounted above in our description for the C-1a example in the ESM Collection. The outstanding Choice Mint State C-9 offered here would serve as a highlight in an advanced type set or early copper variety collection. From the ESM Collection. Earlier from S.H. Chapmans sale of the F.R. Alvord Collection, June 1924, lot 22; S.H. Chapman; John H. Clapp; Clapp estate, 1942; Louis E. Eliasberg, Sr.; our (Bowers and Merenas) sale of the Louis E. Eliasberg, Sr. Collection, May 1996, lot 400; James Swan U.S. Type Collection; Oliver Jung; our (American Numismatic Rarities) sale of the Oliver Jung Collection, July 2004, lot 2; Dr. Hesselgesser; Ira & Larry Goldbergs Pre-Long Beach Auction of February 2007, lot 141. The plate coin for the 1794 High-Relief Head variety in several modern issues of <em>A Guide Book of United States Coins</em>, including 2016. 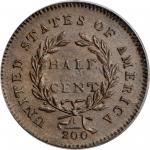