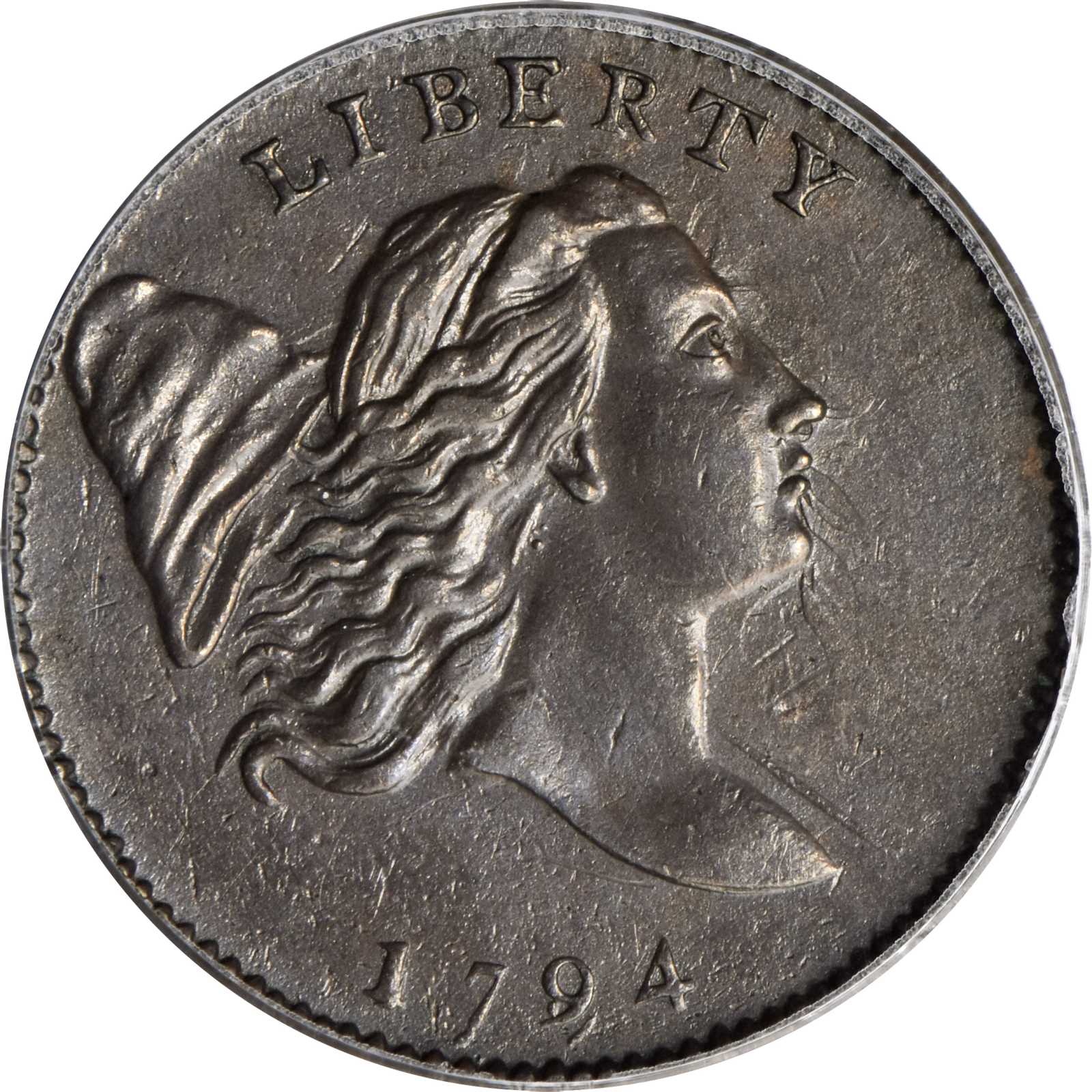 1794 Liberty Cap Half Cent. C-1a. Rarity-2. Normal Head. Large Edge Letters. MS-62 BN (PCGS). Type: Type II: Liberty Cap, Head Right, Large Head.Design: Obv: A head of Liberty with flowing hair faces right, a liberty cap and pole behind. The word LIBERTY is inscribed along the upper border and the date 1794 is below. Libertys portrait for the 1794 is noticeably larger than on the Liberty Cap half cent issues of 1795 to 1797. Rev: A wreath surrounds the denomination HALF CENT, the legend UNITED STATES OF AMERICA around the border and another expression of the denomination, 1/200, below. A ribbon knot with double bow binds the base of the wreath. The dies for this issue were engraved by Robert Scot, possibly after a design by Joseph Wright.Weight Standard: 104 grains (6.74 grams). Manley states that a survey of reported weights for 1794 half cents revealed a range of 90 to 112 grains, with an average of 103 grains. The author also states that, in general, 1794 half cents are slightly wider and thinner than those from 1793.Diameter: Approximately 23.5 mm.Die Variety: Cohen-1a, Breen-1a, Gilbert-9. Obv: The same as C-1b. The digits 179 in the date were initially punched too low, then corrected. Libertys portrait is in low relief and placed high above the date, the pole is weak and does not touch Libertys throat. Manley states that this is the last die variety in the half cent series for which Libertys portrait was hand cut into the obverse die by the engraver (in this case, Robert Scot), and it was likely the first variety struck for the date. Rev: The same as C-1b. The wreath is heavy with four berries in each branch. There are crack-like die defects from the border to the letters IT in UNITED and M in AMERICA, spur on the right base of the first letter A in AMERICA.C-1a corresponds to the Normal Head <em>Guide Book</em> variety of the 1794 half cent, which is also known as the Low-Relief Head to distinguish it from the High-Relief Head of C-7, C-8 and C-9.Die State: Manley 3.0. Obv: Clash marks are evident at the junction of Libertys head and cap, and in the right field extending from Libertys nose to below the chin. Rev: Clash marks from Libertys hair are evident within the wreath at the letters H in HALF and C in CENT. This is the latest known die state of the variety, and the most common among survivors.Edge: Large Letters: TWO HUNDRED FOR A DOLLAR, followed by a single leaf. C-1a is the most available variety of the date with large edge lettering.Mintage: The accepted mintage for this issue is 81,600 coins, achieved in five deliveries during early to mid 1794:-February 22: 10,000 coins-June 4: 16,000 coins-June 26: 16,000 coins-June 27: 16,000 coins-July 8: 23,600 coinsEstimated Surviving Population for the Issue: 2,300 to 6,500 coins in all grades.Estimated Surviving Population for the Die Variety: Rarity-2: 600 to 2,000 coins in all grades.Strike: Nicely executed, the impression is ideally centered on the planchet with all design elements boldly to sharply defined. The crispness of delineation between the individual strands of Libertys hair is particularly impressive.Surfaces: This is a remarkably well preserved example of this underrated type. Hard satin surfaces are toned in handsome antique copper patina, with a few swirls of intermingled autumn-brown evident. Overall quite smooth for both the type and the assigned grade. A thin, shallow graze is noted in the obverse field immediately below Libertys portrait.Commentary: Popular with type collectors as the first Head Right Liberty Cap half cent, the 1794 is also eagerly sought as the only date of the Large Head type. It has been our experience that of all half cent types, the 1794 Large Head is far and away the most difficult to obtain in high grades, handily eclipsing the even more famous 1793 Head Left. Indeed, although the 1794 is not as rare as a date in comparison to the famous 1793, all bets are off when it comes to pieces such as this, offering a combination of high grade, smooth planchet surfaces, and excellent eye appeal. Using these criteria, the 1794 Large Head type is the most difficult to obtain in the entire half cent series. Only a few varieties of the 1794 half cent are known in such remarkable grades as this, with this Cohen number notably scarcer than the C-9 in grades above EF. Manley, in fact, states that only about a dozen examples of C-1a are extant in About Uncirculated and Mint State grades, these coins representing the only high grade examples of the Large Head type available to advanced collectors, as the rare C-1b Small Edge Letters variety is unknown above VF. Clearly this offering represents an important bidding opportunity for specialists. From the ESM Collection. Earlier from Heritages FUN Signature Sale of January 1998, lot 6142. 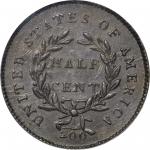