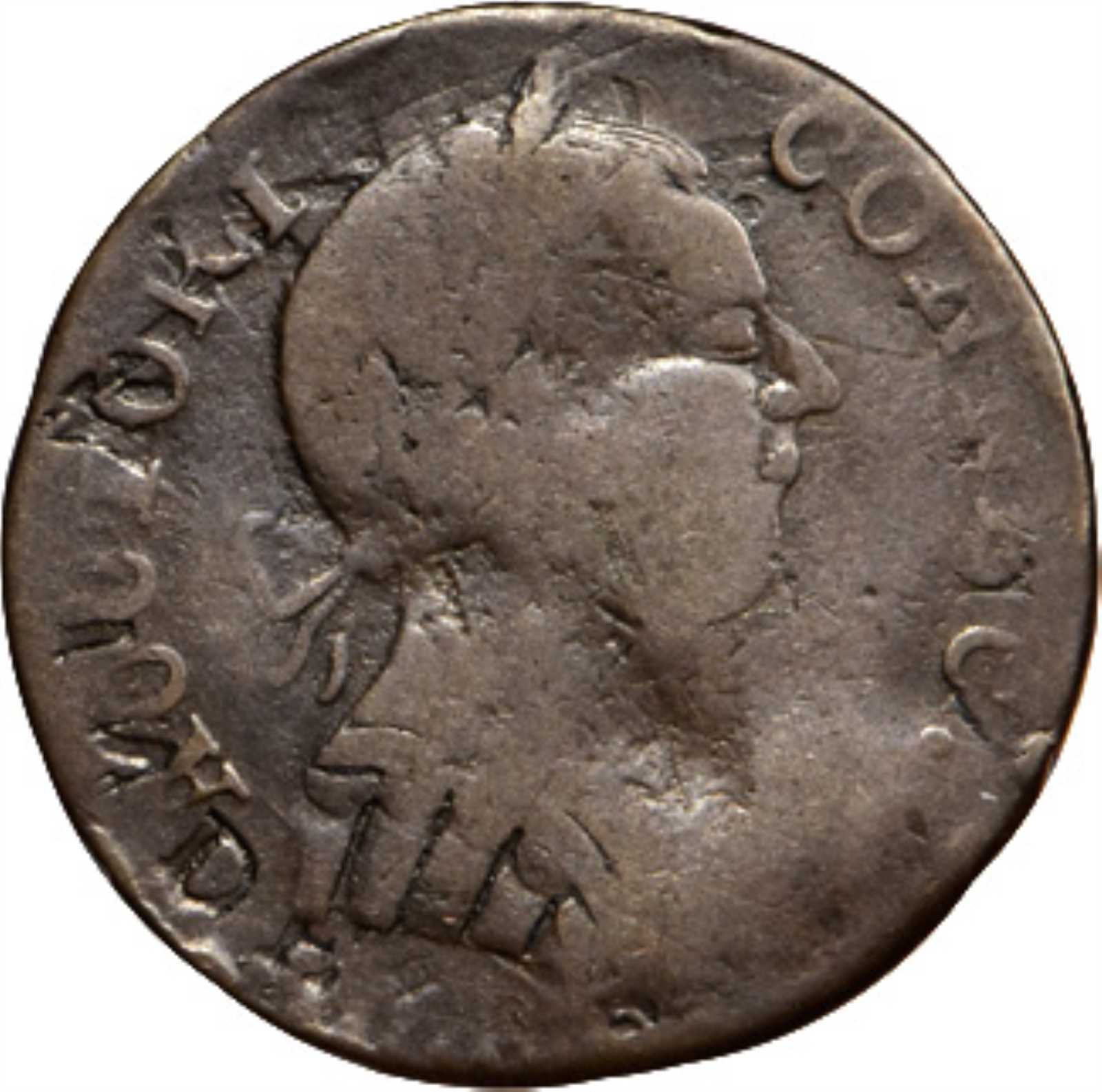 1787 Connecticut Copper. Miller 52-G.1, W-2745. Rarity-6-. Mailed Bust Right, Roman Head. Fine-12 (PCGS). 96.7 grains. A Clark Reverse Plate Coin. An iconic rarity in the 1787 Connecticut Copper series, one of the few types with bust facing right, along with the Small Head and Muttonhead, and one of only five obverse dies (1.1, 1.2, 1.3, 1.4 and 52) that have a Mailed Bust facing right on the obverse; these five Mailed Bust Right dies account for a total of eight die marriages among the 1787s, six of which are R-6, R-7 or R-8! This example of 52-G.1 is a “perfect circ,” boasting light golden brown, smoothly worn surfaces that are absent any disfiguring post-strike marks, though a pair of short old marks flanking Miss Liberty’s head and a few minor rim bruises should be noted for completeness of description. A bit of planchet texture not eliminated by the force of the strike is noted at both obverse and reverse centers and is neither distracting nor abnormal for this die marriage that is struck on flans that are often too thin to bring up the fullness of the design motifs. Obverse die shows bold clash marks, with most letters from the reverse legend at least partially legible through the obverse legends. The obverse die is also badly sunken at effigy’s lower chest, the reverse die is badly cracked from rim through E of ET to inner elbow, and again between 8 and 7, perhaps part of the same crack that possibly gets lost in Liberty’s drapery. This is among the most pleasing survivors of this important die marriage, and was called “Probable Condition Census” by Robert—Ford’s was a rough coin called only “Good” and Twin Leaf’s was called “Good Details” by PCGS, while most of the storied colonial collections were absent this die pairing, like those of Norweb, Hessberg, Oechsner, Roper, and Picker. Most known pieces are low grade, rough, or otherwise impaired, and of fewer than 30 known of this die marriage, fully four of the survivors are impounded in the ANS Collection (2 ex CNL/Barnsley Collection), which also includes a “fifth” example that was used as the host coin for a 1787 Maris 56-n Camel Head NJ Copper! A rare variety that is difficult to find so choice, and a coin that Robert kept for this reason, even though he upgraded to the Choice VF Pine Tree EAC example we sold in the November 2019 auction of his main collection. From the Robert M. Martin Collection. Purchased from David Sonderman’s April 1980 Fixed Price List.