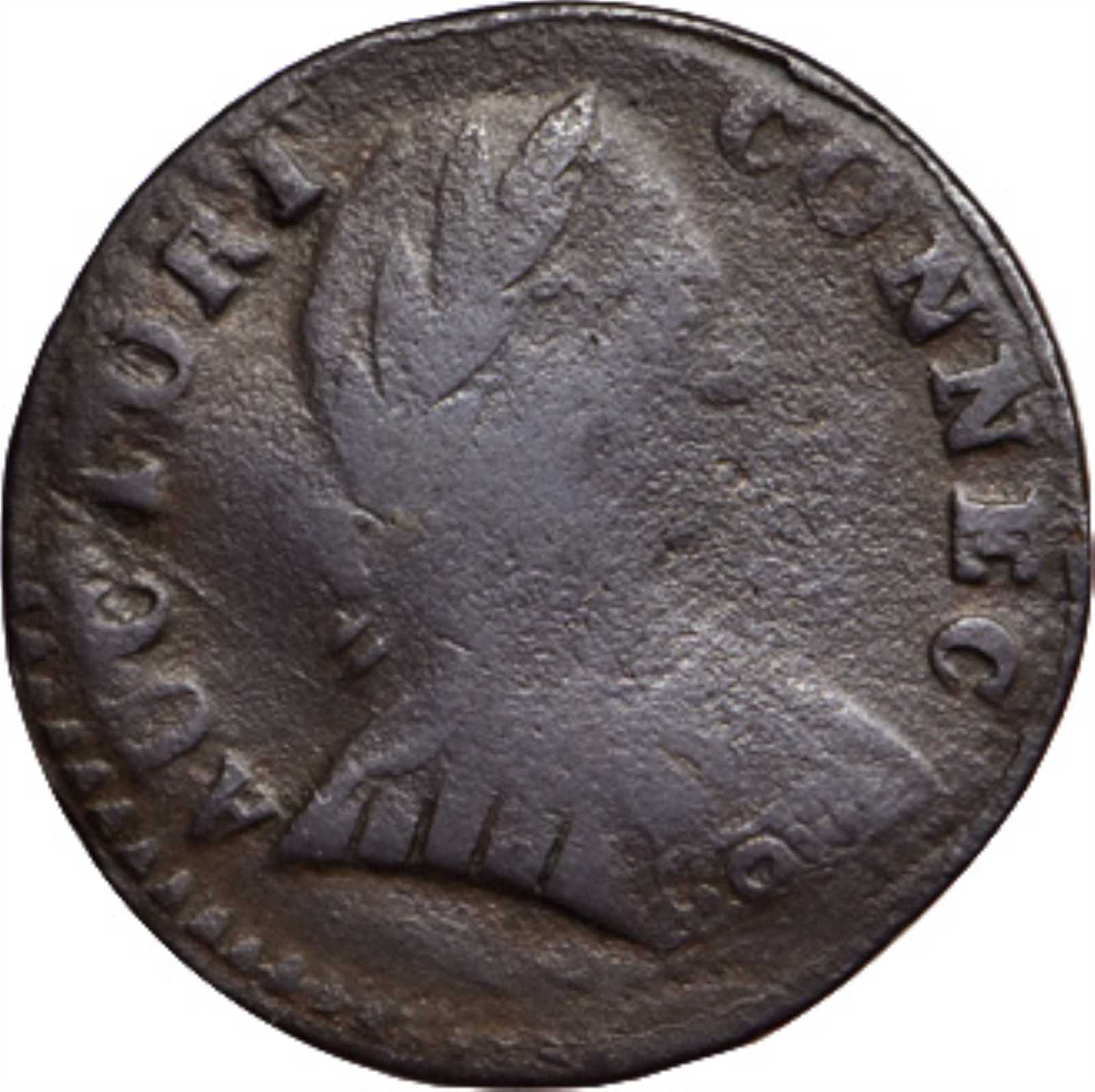 1787 Connecticut Copper. Miller 1.1-VV, W-2710. Rarity-6+. Mailed Bust Right, Small Head, INDE ETLIB. Fine-12 (PCGS). 120.7 grains. A Clark Reverse Plate Coin. One of the most distinctive die marriages among Connecticut coppers, pairing the Small Head obverse with the standard INDE ET LIB reverse that shows Liberty leaning back, almost as if blown by a strong gust of wind. Dark ruddy brown and uniformly granular except at the smoothly worn high points of the devices and legends. Well struck and well centered for the variety, with all legends and date on flan. The catastrophic failure of both obverse and reverse dies that undoubtedly spelled the end to this die marriage and to these dies is plainly visible as mounding at and behind obverse effigy’s head, a similar mounding visible in right reverse field. Called “High Condition Census” on Robert’s envelope, and for its sheer sharpness and completeness of legends, this coin deserves a place in the condition census; there are far more pieces inferior to this than the handful of superior pieces, such as the 1975 Bowers & Ruddy Scott sale piece, the 1965 Vlack Plate coin, and one in a private New England collection with choice surfaces and a distinctive planchet lamination at reverse center. Robert’s other examples, sold in our November 2019 Baltimore auction, was a bit sharper and had superior surfaces but some old scratches on the reverse and brought an impressive $5,040. The chance at another 1.1-VV so soon after the sale of one should not be taken lightly by the advanced collector—we have had the good fortune of selling only 4 of these in the previous 15 years, including Ford’s, Scherff’s, the Anderson-Glecker coin, and Robert’s primary specimen, but it may be many years before another comparably fine specimen becomes available. From the Robert M. Martin Collection. Ex Virgil Brand Collection; 1975 EAC Convention Sale, Pine Tree Auction Company, February 15, 1975, lot 76; The Chesapeake Bay Collection of Connecticut Coppers, New England Rare Coin Galleries, July 23, 1976, lot 41.