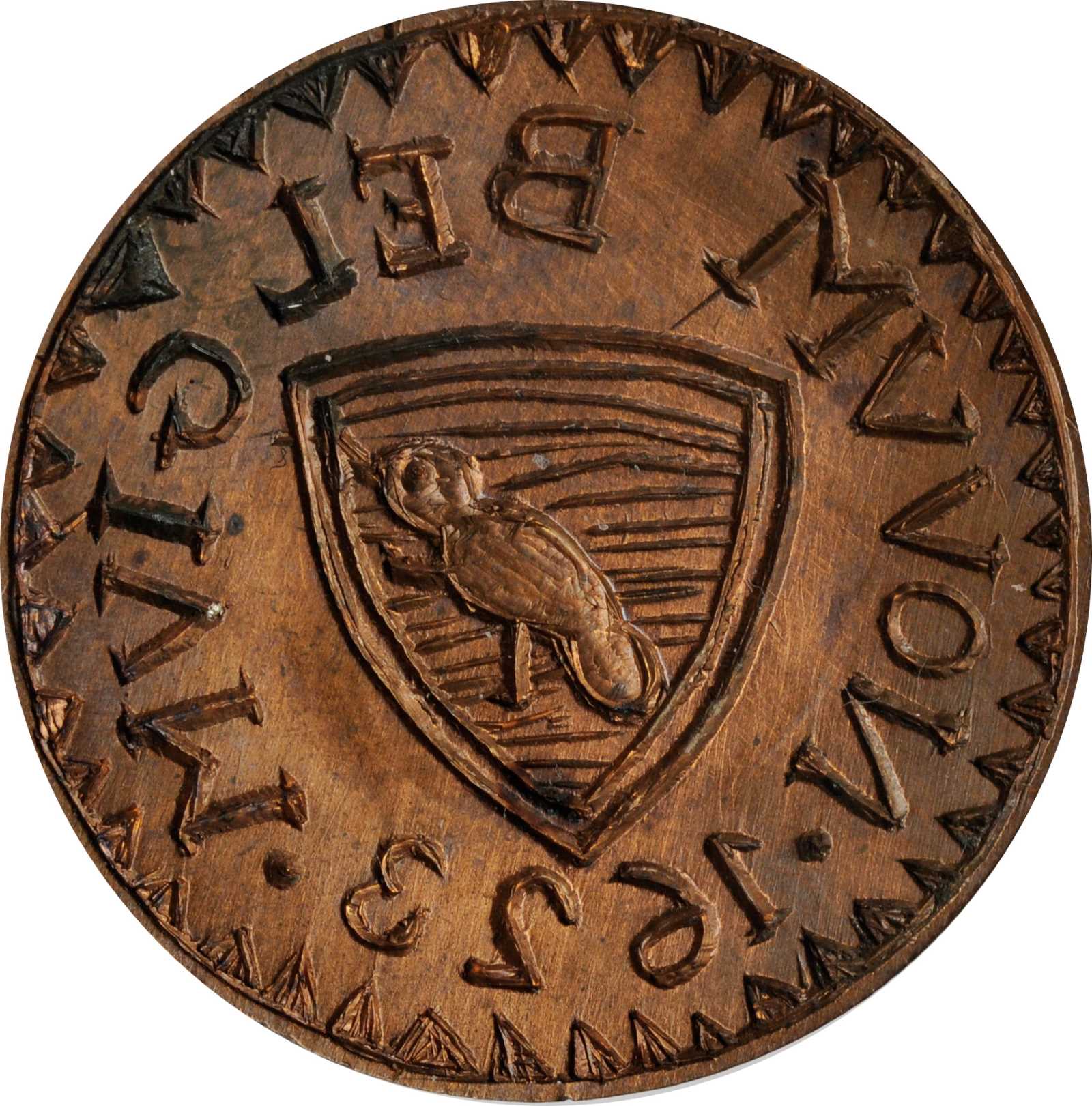 1623 (i.e. 1860s) Novum Belgium Copper Fantasy Obverse Die by C. Wyllys Betts on the Obverse of a ca.1838-1843 Large Cent. About As Made.144.0 grains. The Novvm Belgivm or Novum Belgium Copper is perhaps the most famous of C. Wyllys Betts fantasies and creations made from hand cut dies in the 1860s. It was the "discovery" and publication of this coin by Edouard Frossard in his Numisma magazine in 1877 that prompted the heated exchange between Frossard and J.W. Scott in Scotts Coin Collectors Journal, where it was rather sarcastically pointed out that Frossard had just "discovered" one of a well-known series of frauds made by Betts in the 1860s! The full story is well told in the cataloging of the Novum Belgium Copper that was lot 557 in Part 14 of the John J. Ford, Jr. Collection, as well as on pp.139-145 in the "Pedigreed Forgeries" chapter of Don Taxays wonderful, must read book <em>Counterfeit, Mis-Struck and Unofficial U.S. Coins</em>, published in 1963. Betts offered some of his fantasies through Woodward sales in 1864, and gave nearly 200 of his fantasy coins and dies to Yale University, his alma mater. F.C.C. Boyd, while curator of the Yale Collection in the early 20th century, obtained most of Betts creations, selling some to Wayte Raymond, donating others to the ANS, and keeping select pieces for himself. One Novum Belgium copper was in the Ford sale, ex Boyd, while another is at the ANS (the Defendorf specimen, the one which Frossard had "discovered"), as are both obverse and reverse dies for the known struck pieces, donated by F.C.C. Boyd. The die for the obverse of a Novum Belgium coin offered here is different than the one used to strike the known coins, the shield on the die appearing larger, as do the letters NOVVM BELGIVM 1623, and the relative placements of the lettering and shield differ as well. Betts, describing his productions in a letter to Frossard, wrote that "The dies were cut in copper or sometimes brass, and were so soft as to be often destroyed in the attempt to stamp upon copper or silver." The die surface here is still coppery red and does not appear to have produced any coins, as the details are still crisp and clear and do not show any of the deformation or flattening associated with other of Betts extant dies that were actually used to strike his fantasies. Here is a relic of a fascinating chapter of 19th century American numismatic history, a memento of C. Wyllys Betts, who is best remembered today for his still standard 1894 work, <em>American Colonial History Illustrated by Contemporary Medals</em>.From the Robert M. Martin Collection. Ex the Fourteenth Annual C-4 Convention Sale, November 15, 2008, lot 685.