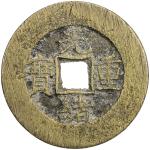 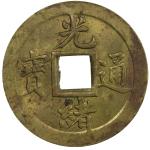 QING:LOT of 913 cash type coins: a good selection of metals, types and varieties, some scarce, many 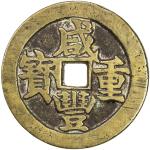 The term "coin tree" is usually associated with the traditional method of casting Chinese coins. By the time of the Tang Dynasty (618 - 907 AD), the coins were being made in sand molds. Each mold would have a number of coin impressions so that many coins could be produced at a time. These coin impressions were connected by channels so that the molten bronze could be poured into the mold at one opening and then flow to all parts of the mold. Once the bronze had cooled and hardened, the two halves of the mold were separated and the coins removed. However, since all the coins were connected by the channels through which the bronze had flowed, the bronze in the channels had hardened as well resulting in all the coins being connected together.

The metal object that came out of the mold actually looked like a small "tree." The main channel through which the bronze had flowed resembled the "trunk" of a tree. The smaller channels which ran from the main channel to each individual coin looked like "branches." The coins were the "leaves." The coins were then broken off of the "branches." This left a small metal stub, called a "sprue", on the edge of each coin where it had been attached to the "branch. The molding process would also leave a little excess metal on the edge of the coins. The sprues and excess metal needed to be filed off to improve the appearance of the coins.

The coins, which all had square holes in the center, were then stacked onto a square metal rod. The combination of a square rod threaded through the coins square holes locked the coins from rotating on the rod and thereby made it easier for the worker to file off the sprue and excess metal on the edges of the coins. Master Sergeant L.B. Whittier bought this coin tree while in Japan during the American Occupation. He was stationed with the U.S. Fifth Air Force at the Nagoya Air Base.