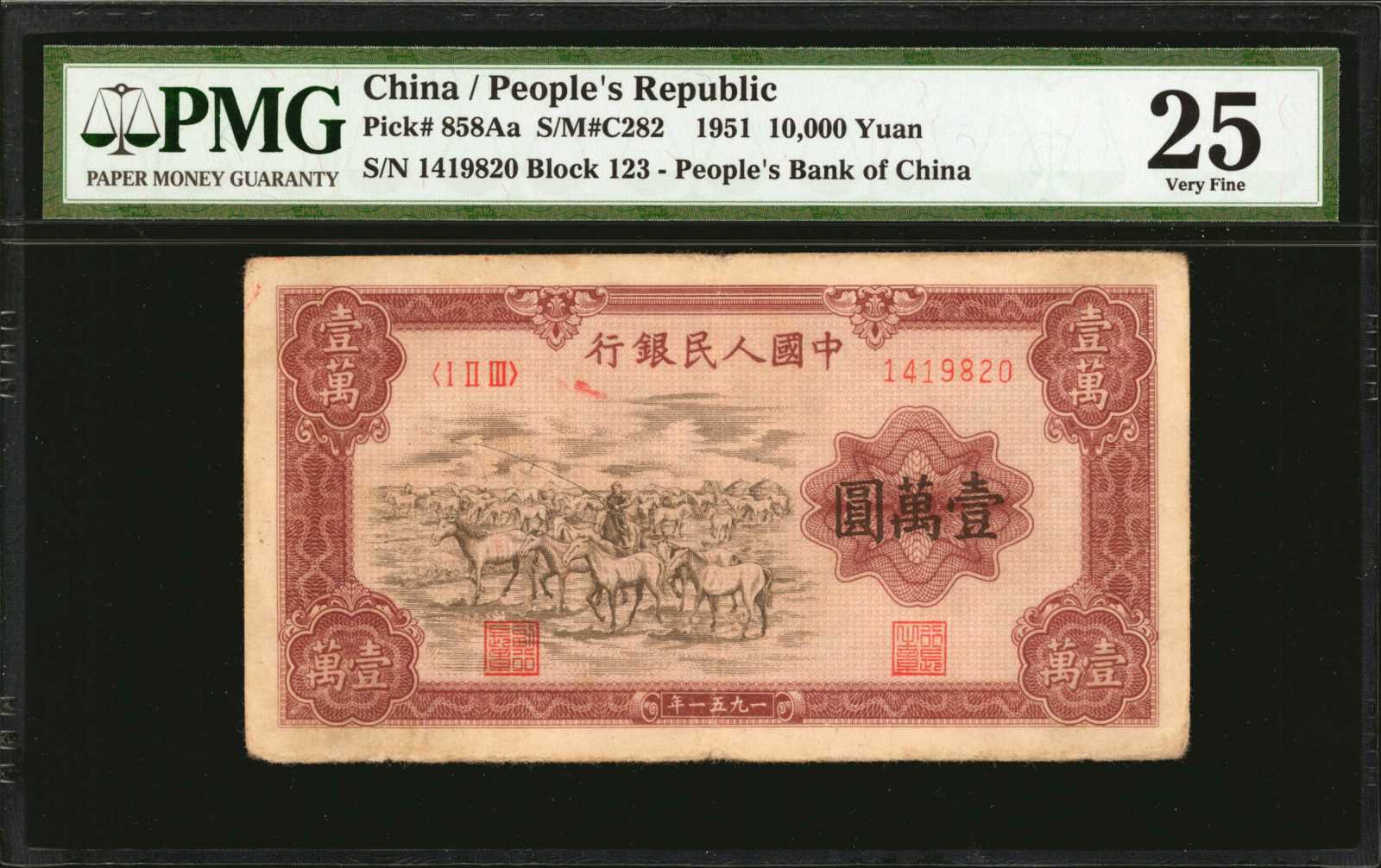 CHINA--PEOPLE S REPUBLIC. People s Bank of China. 10,000 Yuan, 1951. P-858Aa. PMG Very Fine 25. (S/M #C282) This 10,000 Yuan note, considered the most desirable of the first series of Renminbi, appears here with some typical circulation for the technical grade, but is every bit worthy of the attention it surely will receive. No major netting defects are present, which is verified by the comment free holder.

The note was originally issued in Inner Mongolia and was not mass distributed. Herdsman with horses seen on the center of the face design, with a muted purple-maroon border and underprint. One of just a handful certified by PMG, as there just aren t enough of known and available examples to supply the collector demand. This treasure is considered the Holy Grail of PRC notes, and this particular piece has the grandest history of all of the known issued notes of the type.This example hails from one of the most prestigious banknote collections of all time, the Ruth W. Hill Collection. Mrs. Hill, or Mrs.

Adolf B. Hill Jr. as she preferred to be addressed, was known as the "Grand Old Lady of Paper Money" and is Honorary Life Member #2 of the I.B.N.S. and was the first to have the honor of Honorary Director for Life. She has been the President of the IBNS(1979-81), and it has been said she once saved the IBNS from collapsing financially(mid 1960 s). She was very philanthropic and took an interest in banknotes because her husband was a representative for a company that made specialty inks and dealt with the Bank of Mexico. Included with this lot is a photocopy of a page of the official ledger kept by the bank that received her collection upon her passing. On the page, is this note, with a listed catalog value of merely $200. Unfortunately for our bidders, this note will cost exponentially more than that in today s market. This is the same exact note that sold for over $199,000 to Chinese Art Collector James Liu, who has held onto it since. This piece was one of the treasures in Mrs. Hill s collection that truly exemplified what an extensive collector she was, and will likely find its place in a collection that rivals hers.