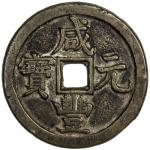 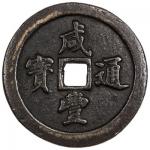 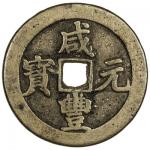 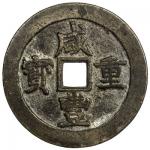 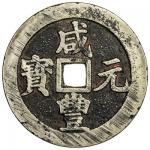 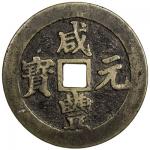 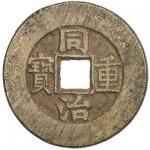 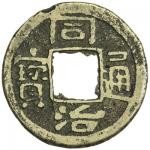 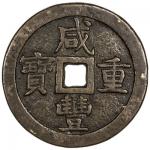 QING: Xian Feng, 1851-1861, AE 500 cash coin tree, Board of Revenue mint, Peking. H-22.720 for type. Prince Qing Hui mint, 'sun & moon' above, cast May-August 1854, brass (huáng tóng) color, cast tree of 14 coins. All coins are obverse up except one example which is inverted on the tree. It is much more highly detailed in the casting than other specimens. The inverted example is also one millimeter larger that the other examples and connected to the tree by a larger spur. This one example on the tree is likely a yang qian (sample coin). This tree is of the utmost rarity and likely unique. We know of no other specimens in existence in private or museum collections, EF, RRRR.
Estimated Value$55,000 - 75,000.

After the consignor had acquired possession of a house, he discovered the item in a old cabinet. Since he had lived in Hong Kong and China back in the 1980’s he took an interest in researching the object, deciphered himself the characters Xian Feng Yuan Bao and concluded that this object could have some historical interest.


The house in question had been acquired in the early 1900’s by the previous owner's ancestor after he had made money in the Far East in the second half of the 19th century where he spent years as director of a trading house. One can assume that this extremely rare item came into the family’s possession during this period. In order to learn more about the item, the owner then consulted Mrs. Helen Wang from the British Museum, Department of Coins and Medals, who directed him to Mr. David Hartill who wrote the book " Cast Chinese Coins ". He then searched the internet to see which auction houses specialized in cast Chinese coins and came across our firm’s name.