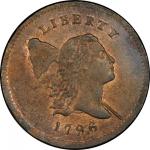 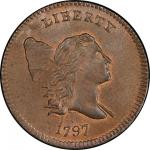 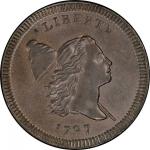 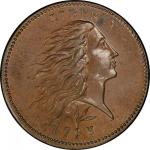 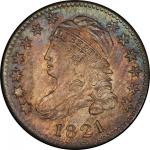 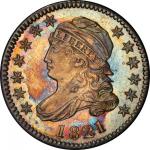 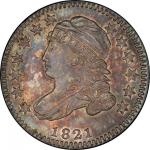 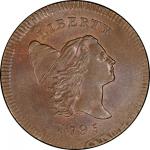 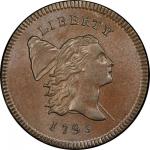 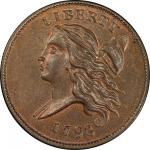 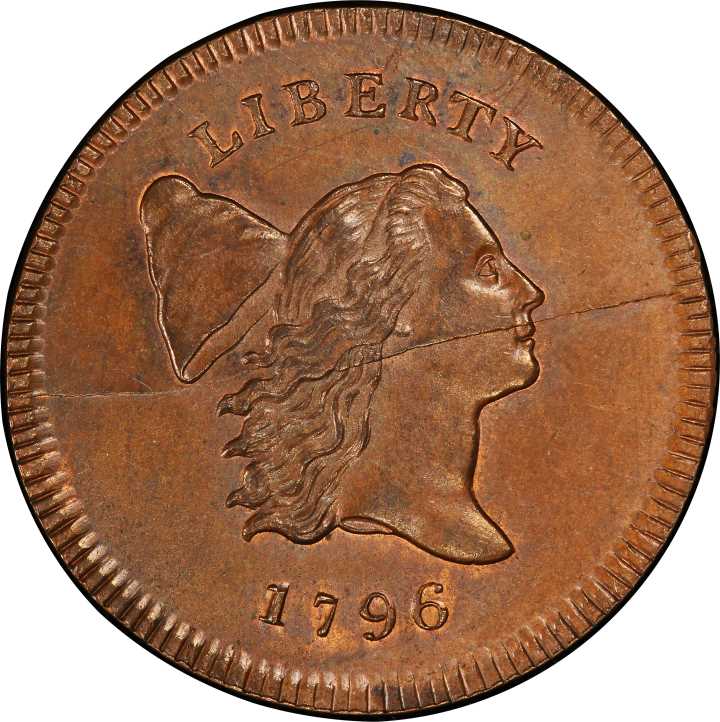 1796美国无杆版自由帽半分 PCGS MS 67。“This is the finest known specimen of the rarest half cent.”  — Louis Eliasberg, 1956 The ultimate example of the ultimate half cent, this was the first example of the smallest American denomination to sell at auction for over a half million dollars. Sold in 1996 after 50 years spent in the Eliasberg Collection, this is its first public offering since and only its third since 1912. The Earle-Atwater-Eliasberg-Pogue 1796 No Pole half cent has captured the imagination of some of numismatics’ most notable catalogers and connoisseurs, nearly all of whom have given it first rank atop the census of all known specimens of this famous rarity. Its visual appeal is superb, with light golden brown toning showing rich remaining vestiges of mint color around LIBERTY, the date, and around central devices. Some faded mint color expresses faint pastel highlights of sea green and blue in proper light, particularly noticeable above Liberty’s cap.

The fields are lightly reflective and boldly lustrous, with profound cartwheel present on both sides. A few wispy hairlines above TY of LIBERTY are visible only under certain lighting conditions, and another above E of that word is even more difficult to see. Two ancient parallel scratches above Liberty’s head are crossed by a fainter one that disappears under R of LIBERTY. A tiny raised speck adheres to the field surface near the juncture of Liberty’s nose and forehead, while the merest surface granularity in the lower left obverse periphery and near the top of the reverse wreath is found only with a glass. The overall visual impact, as indicated by the grade assigned, is that of an absolute superb survivor, one of the most remarkable of all early American copper coins. Despite the definitive bisecting obverse die crack that condemned this variety to great rarity, the striking sharpness is excellent on both sides, even at centers. The centering is excellent, with long dentils framing the full extent of both sides, trivially aligned to 7:30 on the reverse. The die state is actually early for the variety, with a pause in the bisecting crack at the deepest recess of the obverse die, the highest relief of Liberty’s hair centered under the cap.

In later states, this break becomes heavier and continuous, ultimately destroying the die. The reverse is especially bold and crisp, though the lapping process that finished the die’s production before even a single coin was struck removed some details from the right side of the wreath, including the right side of the bow and the centers of several interior wreaths. While Breen divides this variety into two die states, of which this is State I, Manley lists a single die state of the 1796 No Pole.&nbsp; In the April 2012 issue of Penny-Wise, the journal of the Early American Coppers Club, Michael Spurlock accounted for 26 positively identified discrete specimens from these dies, along with several other untraced auction appearances over the last 150 years. Just nine specimens were reported in the 2005 1/200 survey of notable half cent collections, and only two examples were displayed during this variety’s last EAC Half Cent Happening appearance in 2014. Of the 26 or so specimens known of the 1796 No Pole half cent, only three have been graded better than Very Fine by PCGS. Another high grade example has apparently never been certified, though it does not threaten this specimen’s position of primacy. The vast majority of survivors are in the lowest collectible grades, mostly dark, worn, corroded, and lacking visual appeal.

None can fairly be called well worn but choice. At the other end of the spectrum, three or four are known in Mint State, of which this is widely acclaimed as the finest. The Breen/Hanson census called it “a true Mint State coin, free of any problems.” Henry Chapman went even further, calling it “Proof,” commending its “exquisite light olive color, with traces of original red on both sides” and “sharp, even impression, with deep, even milling.” When this coin was offered as part of the 1996 Eliasberg sale, the market agreed with prior admirers, as bidders drove this coin to a new world record for any United States copper coin. That record price of $506,000 would not be surpassed for almost a dozen years, until January 2008. Walter Breen recounts the story of a bet laid by the late Morton Stack when this coin was on display in August 1952, presumably at the American Numismatic Association convention, held that month at the Hotel Statler in New York City. Stack laid a $1,000 wager that “this coin could not be approached in condition by any other specimen of the variety.” As Breen pointed out, it’s a bet Stack could have lost, as the Showers-Tettenhorst-Missouri Cabinet specimen was then known and at least approaches the condition of this piece. It is currently certified MS-65 BN (PCGS).

In the January 2014 sale of the Missouri Cabinet Collection, it realized $891,250. Before 2014, the best PCGS-graded 1796 No Pole half cent to sell at public auction was the Ray Rouse coin, graded F-15 (PCGS), which realized $345,000 in September 2008. The provenance given for this piece in the 1983 Breen half cent encyclopedia and the 1996 Eliasberg sale was incorrect. This coin was not included in the 1895 sale of the Richard B. Winsor Collection; the photographic plate of the Winsor 1796 No Pole is a definitive match for the Murdoch-Showers-Missouri Cabinet coin. A connoisseur’s ultimate prize among coins of this denomination, the D. Brent Pogue 1796 No Pole half cent has been legendary longer than anyone who will read these words has been alive. Eric P. Newman was only a year old when Henry Chapman breathlessly cataloged this coin for the Earle sale. Over a century later, Chapman’s firm sentiment that this coin was “the finest specimen of this variety known” remains true. The 1796 No Pole is still “of excessive rarity,” perhaps even more so, as few new specimens have been discovered even as the number of collectors who desire one has grown geometrically.&nbsp; PCGS# 35096. 1796 Liberty Cap Half Cent. Cohen-1. Rarity-6. No Pole. Mint State-67 RB (PCGS).